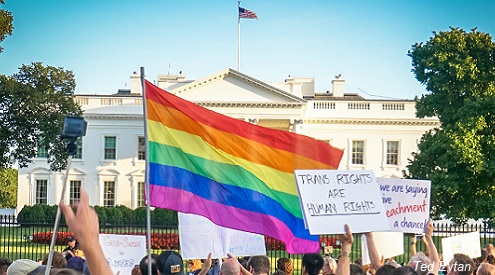 The House of Representatives passes the Equality Act, a bill entitled to remove discrimination based on sexual orientation and gender identity.

Members of the York LGTBQ community react as the Biden-led Equality Act (H.R.5) moves to the United States Senate after passing with a final vote of 224-206 in the House of Representatives

On Feb. 24, the House of Representatives passed the Equality Act, a set of legislation that was a major campaign promise for President Biden. The goal of the act is to protect LGBTQ+ individuals and employees from discrimination based on sexual orientation or gender. The Senate will vote on and likely amend the act in the coming week.

The Equality Act would permanently implement the Supreme Court’s 6-3 in the case Bostock v. Clayton County made in June 2020 that the protections based on sex as defined in the Civil Rights Act of 1964 extend to sexual orientation and gender identity. In addition, the Equality Act will expand those protections to federally funded programs, housing and public services including bathrooms.

“In a community like Elmhurst, obviously, you have the bathroom issue where people will now be able to use bathrooms that coordinate with their gender identity,” Empower co-president and senior Clare Cockman said. “Businesses won’t be able to discriminate on the basis of sexual identity, gender identity, or sex. I think we’ll see some of that impact on communities like Elmhurst.”

While businesses in Elmhurst would be affected by the passing of the Equality Act, so would York students as well. The legislation would impact the way many students of the LGBTQ+ community at York feel regarding their futures.

“In addition to further non-discrimination legislation promoting social acceptance, the Equality Act will most likely affect issues surrounding access for transgender people at York, and will hopefully make the overall environment more welcoming,” President of AS.IS and junior Maria Mahnken said. “The greater legal protections also lend themselves to a sense of security for LGBTQ+ students, easing worries over a future job or housing discrimination, and decreasing the overall anxiety of existence.”

While the bill successfully passed the House of Representatives, it still needs to pass the Senate before being signed into law by President Biden. Given the narrow 50-50 split in the Senate, the Equality Act is likely to face scrutiny and undergo changes in order to successfully pass as both Senate Republicans and moderate Democrats have voiced concern against the bill.

“The act is going to be pared down for sure if it does pass, so I think we need to look at what happens if it does pass the Senate,” Cockman said. “I think some of the things that will get taken away in that process, because for sure there will be things that might be very valuable, and we won’t necessarily know until we lose them.”

Either way, this serves as a step towards eliminating discrimination against LGBTQ+ members. However, many students recognize that a change in legislation is not the only thing needed to execute the objectives of the Equality Act.

“There’s a lot of change that can’t be fixed through simple legal action. People still use ‘gay’ as an insult, and a lot of people still view the LGBTQ+ community negatively,” Vice President of AS.IS and junior Monica Wang said. “A lot of change still needs to be made in the mindset of people in order to actually reach the goals of the Equality Act, but even with that said, the Equality Act being passed would still be a huge success for our community.”