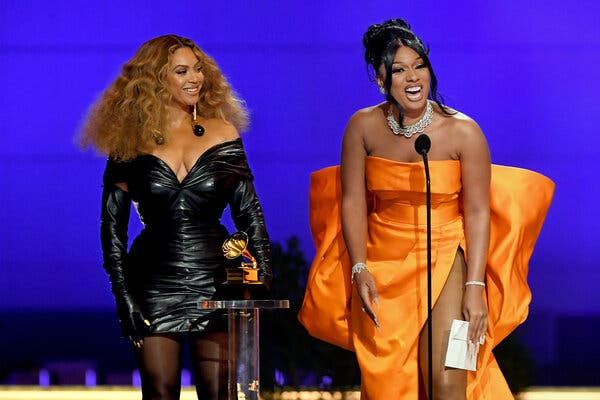 Last night, the 63rd Annual Grammy Awards, hosted by Trevor Noah, took place at The Staples Center in Los Angeles, though they were anything but ordinary. The pandemic placed its restrictions on the ceremony’s normal way of operating, and the actual awards and speeches took place across the street from the Staples Center while the performances were within the stadium itself. There was plenty of controversy surrounding last night’s ceremonies and boycotts from artists such as The Weeknd and Halsey after the lack of nominations for what many saw as some of the most popular songs and albums of the year. Despite that, the awards went on seemingly without a hiccup, featuring 19 performers of varying styles, more than twenty presenters, nominees and other musical legends. In a rather unusual fashion, the ceremony actually took the time to dive into the backstories of some of the most popular nominees as well as pay homage to many small music venues around the country that suffered due to the pandemic. Here are some of the night’s biggest categories and the superstars that took home the prizes.

This category’s nominees were kind of all over the place in terms of genre; they range from alternative to rap to country to pop. Artists like Doja Cat and Phoebe Bridgers were definitely favoured by critics and their respective fan bases, but it was no shock when rap queen Megan Thee Stallion took home the trophy. Despite being around since 2016, she took off in 2020 and truly characterized the hit charts of the past year.

Record of the Year

Winner: “Everything I Wanted” — Billie Eilish

These past two years, Eilish has dominated the Grammy’s scene; the nineteen-year-old star has truly carved out her place in music history, and her slow yet hauntingly thoughtful “Everything I Wanted” definitely deserved an award. It’s no shock that she took home this coveted award for the second year in a row, and she will surely bring it home again.

“Everything I Wanted” — Billie Eilish

There’s no song that represents summer of 2020 more than “Watermelon Sugar”. Though Swift and Eilish were definitely favorited due to their incredibly popular songs and their past wins, Styles definitely fits this win, and this song’s continued popularity only reaffirms that.

Song of the Year

“Everything I Wanted” —  Billie Eilish

“If the World Was Ending” — JP Saxe featuring Julia Michaels

In such a stacked category, it can be hard to predict who will take home the big award. But, I think it’s safe to say that very few people expected R&B superstar H.E.R to take home the night’s big prize and one of the most coveted awards of the evening. Her smooth vocals and incredibly relevant lyrics struck a chord with lots of listeners, and though she wasn’t the first prediction many had in mind, there’s no doubt that she’s worthy of taking home such an award.

Album of the Year

This is another category in which the styles of music represented are all over the place; there’s funk, rap, pop, rock, amongst others. It’s about time Taylor Swift won an award for “Folklore”, the first of two albums she released in 2020 alone. Rather than sticking with her more recent pop, Swift took a different approach, mixing her heartfelt lyrics with a more acoustic, indie pop sound, creating something incredibly unique. It’s no wonder she took home the prize, and it was incredibly well deserved.

In an award that I expected to go to Swift and Bon Iver, I am pleasantly surprised to see Gaga and Grande take home top prize. Their summer hit “Rain on Me” was both inspirational and catchy as well as a hit on the radio, the charts, and social media.

Dua Lipa is quickly cementing herself as an artist to watch out for. Last year she brought home the award for “Best New Artist”, and her second studio album has become even more popular than the first. With its disco-fueled tunes and poppy lyrics, it’s no wonder the Academy gave this quintessentially pop album the top award.

Fiona Apple’s 2020 album “Fetch The Bolt Cutters” was an instant hit amongst alternative rock enthusiasts, and though artists like HAIM, Phoebe Bridgers and Grace Potter were close competitors with their major hits being nominated, no one did rock this year quite like Apple. Her song was funky yet quintessentially rock, making it the perfect win.

Fiona Apple brings yet another win, an impressive feat for any artists, even those as cemented in their genre as she is. “Fetch The Bolt Cutters” is her latest album release since 2012, and it’s quirky yet comforting rock sounds wowed critics and became the favorite for many of last year’s listeners.

Surprisingly, Apple missed out on this award, but it very fittingly was given to Britanny Howard, whose feel-good and soulful hit “Stay High” perfectly encapsulated everything sweet and comforting about what rock should be. While songs like “Kyoto” and “Lost in Yesterday” were just as beat-fueled, there’s nothing quite like the energy brought through the sound and lyrics of “Stay High”.

With her third win of the night and her 28th overall, Beyoncé made history last night as the artist, male or female, with the most Grammy awards. Once again, not a surprise; it seems that anything Beyoncé does nowadays garners a Grammy award. I am honestly not a big listener of Beyoncé, but her record-breaking wins has me very interested in her discography.

With so many major hits and names in this year’s Best Rap category, it can be kind of hard to pick a favorite. Megan Thee Stallion’s second win was, again, a shock to no one; “Savage” was one of the most popular songs of the past year, and Beyonce’s cameo on the track only catapulted that popularity.

“Highest in the Room” — Travis Scott

Fresh off an incredibly well-received single release with Bruno Mars under the alias “Silk Sonic”, R&B mastermind Anderson .Paak brings home the top award with his incredibly poignant “Lockdown”, a song detailing the pandemic and the many political changes that came with it. The funk-filled track wasn’t necessarily expected to win, but I’m very glad that it did.

“Your Life Is a Record” — Brandy Clark

I am not really a major country music listener myself, but I wasn’t shocked when I saw Lambert took home the prize. Her live performance during the ceremony was one of the best country performances of the night, though I was unfamiliar with her album before the awards, I was pleasantly surprised by how much I enjoyed it when I listened to some of the tracks.

My Favorite Moments of the Night:

My Least Favorite Moments of the Night: