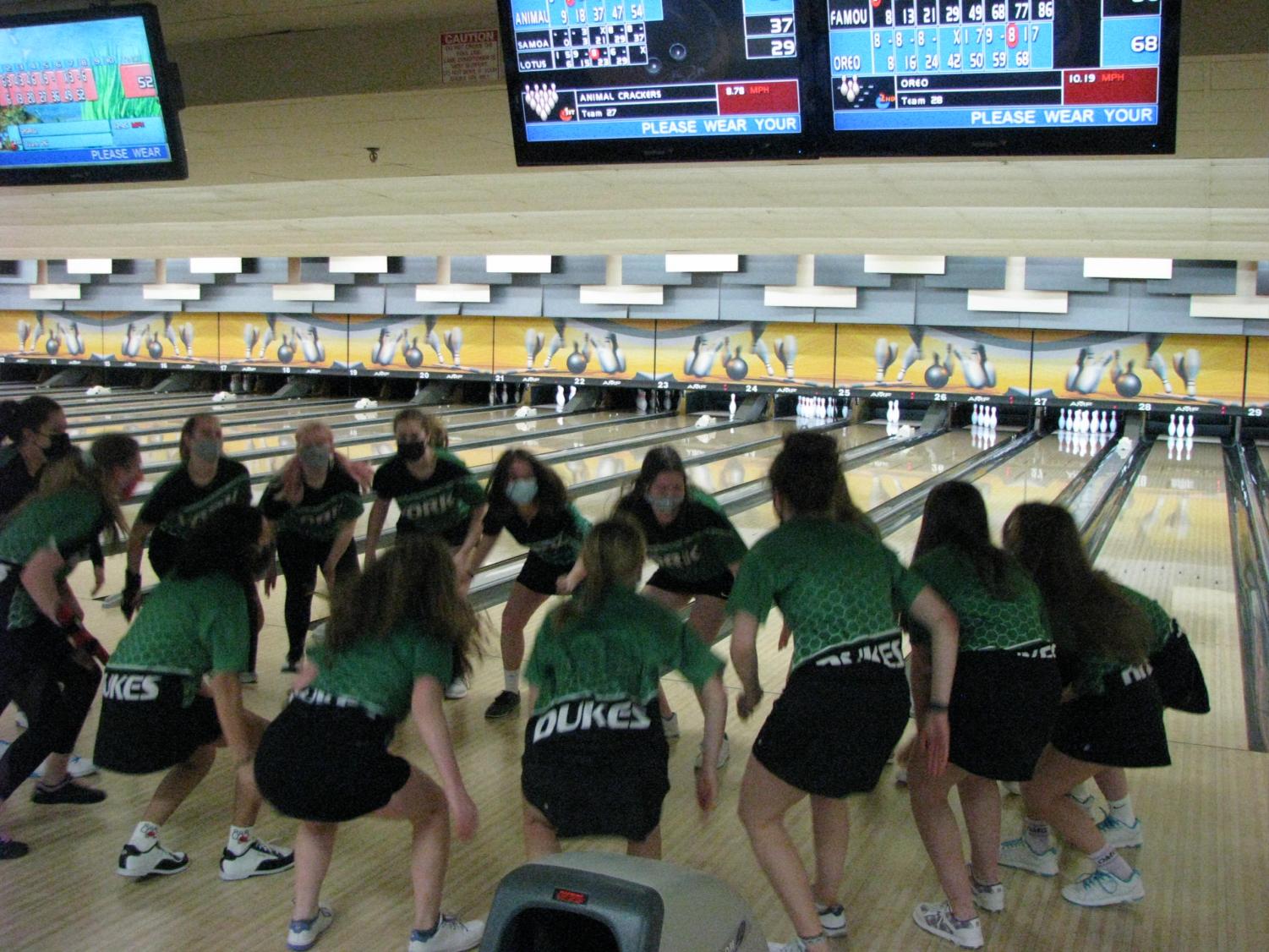 Here come the Dukes: At a junior varsity bowling practice on Friday, March 5, the team huddles up together to shout, clap and stomp their team chant at Stardust Bowling Alley. (Photo by Jackie Cimino)

Here come the Dukes: At a junior varsity bowling practice on Friday, March 5, the team huddles up together to shout, clap and stomp their team chant at Stardust Bowling Alley.

Bowling and Breaking Records: The Lady Dukes are a force to be reckoned with

As the Lady Dukes bowling season wrapped up this past week with one of the best seasons in York Bowling history, it is safe to say the girls knocked down the competition like bowling pins. While the COVID-19 pandemic affected core elements of a regular season, like habits at practice and conferences, the team persevered through to a record breaking season.

For the fifth year in a row, the junior varsity team remained an undefeated conference champion. Varsity finished the season as back-to-back conference champions as well and earned tenth place in the virtual state competition, the highest placing at a state bowling competition York has earned.

“It was the best season we’ve had in my eight years of coaching,” Katie Turnball, psychology teacher and Head Bowling Coach, said. “It was just absolutely incredible. I’m so proud of this group and all they have accomplished together.”

The trend of this seasonal success continued on with individual achievements as well. Sophomore and varsity bowler JJ Bolden scored a York record of 300 points. Senior and varsity bowler, Holly Santucci, was conference champion for the second consecutive year.

“I think I really had two feelings the moment I learned that I had become the conference champion for the second year in a row: relief and euphoria,” Santucci said. “After my last shot when I realized what I had done, I felt like I was unstoppable, truly the best feeling I think anybody could ever experience. I remember going home with the biggest smile on my face with feeling like I did it.”

With new restrictions, players were not allowed to participate in what would be a “normal” state competition. Rather than attending a state competition in Rockford, the bowlers participated in an online tournament on Saturday, March 11, from Stardust Bowling Alley in Addison.

“Virtual state was an experience, it truly was,” Santucci said. “As fun of an experience as it was, we had a little bit of a rough start. We finished by shooting a 5,400 which definitely does not reflect how good our team truly is, but the later games showed how well we can pick each other up. We ended up finishing 10th in the state and JJ and I finished top 25th and 26th in the state. We are so proud of everybody who bowled.”

How did the Lady Dukes achieve one of the best bowling seasons ever recorded?

“No secret, just a LOT of drills,” Turnbull said.” The foundation to successful bowling is good mechanics. Also, their amazing camaraderie and teamwork. Bowling is unique because all levels practice together at the bowling alley at the same time, we aren’t in separate gyms or competing at different locations or different times – it creates a sense of unity on the team that is not typically found anywhere else.”

Whether it was on the varsity or junior varsity team, the players made it apparent that the comradery they felt from their fellow teammates acted as one of their favorite parts of competing with the Lady Dukes.

“I have been on the bowling team for three years so far and every season, even this season, is full of excitement and it’s fun to have a place to go to where there is such a friendly environment and everyone truly feels like part of a team,” junior and junior varsity player Anna Clink said. “You get very close with people when you talk to them for two hours every day and I would have to say that is my favorite part along with the actual bowling aspect.”

While there is still one last state meet in June, the team has accomplished so much this season and look forward to what is to come.

“My favorite part is definitely watching the team break records, whether it is a person’s personal best score, or the team breaking a new school record, whatever the previous best was, they find a way to surpass it year after year,” Turnbull said in response to an inquiry about her favorite thing about coaching the girls.