THIS IS YORK • March 24, 2021 • https://thisisyork.org/31036/features/dual-state-champion-james-golen-reflects-on-his-last-speech-season-at-york/ 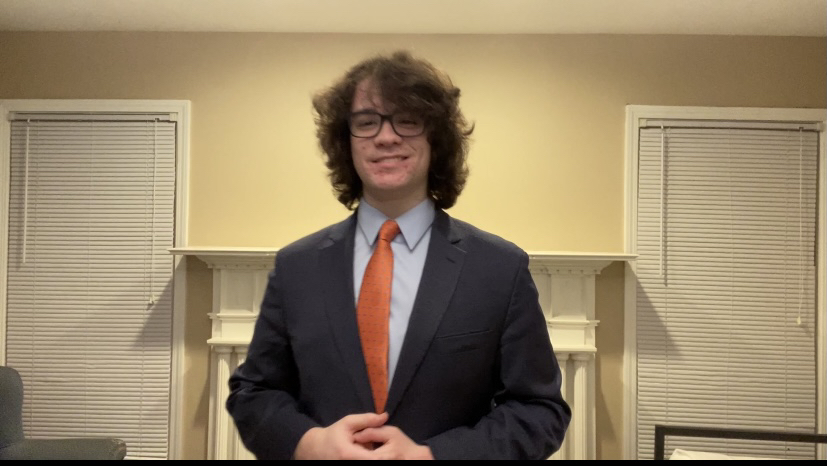 Photo of James Golen delivering his final round speech, recording himself to be viewed in a later ceremony. Golen received this ceremony after being crowned State Champion in both extemporaneous and impromptu speaking at the IHSA Speech State Series.

Four long years of hard work, raw talent and determination all culminating in one moment: this was the position senior York Speech member James Golen was in at the IHSA Speech State Series, and as the placements rolled in, tensions were high. But then, overwhelming relief as first place was announced; James Golen had won first place in the State Series for both extemporaneous and impromptu speaking.

The state series for speech on Feb. 20 resulted in big wins for York’s very own Speech Team, which placed multiple contenders in the final round and took fourth place overall. Two of the biggest wins came from Golen’s well-deserved two State Championships, which garnered much excitement throughout the team.

“I was a mixture of very surprised and very relieved,” Golen said. “I was very overwhelmed, and it was wonderful, and I turned my camera off and jumped out of my chair and we all started yelling. And my extemporaneous coach opens the door to my room, and he just points to me and he yells. And I can’t hear him over everyone else, it was just a lot of energy.”

However, the two State wins did not come without strife, as Golen worked hard to hone his skills in both extemporaneous and impromptu speaking over the past season. Extemporaneous speaking itself is a tall order, requiring quick thinking and speech writing skills to craft a long, complex speech within the time constraint.

“They give you thirty minutes to take this political question,” Golen said. “For example, the one I had was now that impeachment is over where does the Biden administration’s agenda stand. You take a question like that, and you have thirty minutes to research it and craft an argumentative thesis on that question with three supporting sub-claims.”

Thankfully, Golen had the benefit of experience on his side, as well as a few other skills that helped him succeed in the past.

“One of James’ biggest strengths is not only is he able to prepare within thirty minutes an answer to any question, but then he really retains that in his memory,” York Speech Team coach Justin Ali said. “So, if he ever sees a similar question again at a tournament, he can just go in his memory bank and pull up that previous speech. He doesn’t have to waste a lot of time rereading the same information or re-familiarizing himself with the same topic.”

However, impromptu was a little tougher to master. With even less preparation time, impromptu speakers are expected to respond to a brief phrase or prompt by creating a thesis and backing it up with evidence from a variety of different places.

“A lot of the people that do impromptu speaking know that it’s not that they hate the event, but it’s just very stressful,” Ali said. “It’s very stress-inducing because you have so little time to prepare. A lot of people let that bleed into their prep time and bleed into their speech. And it took until two weeks before State until James could finally stop doing that, to stop getting stressed while prepping and actually speaking, and actually start having fun with the event.”

Golen persevered throughout the season, working with Ali to improve on his delivery and inject his personality into his speeches more often.

“The first is that I tried spending a lot of this year becoming more conversational in my delivery of speeches,” Golen said. “Less like I’m presenting a topic, news report, or lecture, and instead more like having a conversation with the audience. I also told more jokes this year. The last speech I gave had three jokes in it, which was three more than any of my speeches from the entirety of my freshman, sophomore, and junior year combined.”

One of the few problems Golen had over a remote season was the absence of a physical audience to gauge their reactions to his delivery, which caused him to sometimes give inconsistent, uninspired speeches. However, he and Ali caught the problem early in the season and came up with a simple solution.

“We started having his sister Nora and his parents watch him while he gave speeches,” Ali said. “That way, he still has an audience, but we can still follow all of the COVID-19 restrictions. That really helped solve that issue.”

Of course, their efforts resulted in a season Golen could not only reign champ in, but also be proud of the work he produced.

“I was really happy with both of the speeches I gave in those final rounds,” Golen said. “Throughout the day, I had given some speeches that I was disappointed in and I thought weren’t the best I could’ve done. I didn’t feel that way walking out of those last speeches in extemp and impromptu. I felt that in those subjects, I couldn’t have given a better speech, and even if I got sixth in both events I would’ve been happy with what I did.”

Ali reflected on his opportunity to coach Golen this year, as well as his ability to mentor the York Speech Team overall.

Golen also expressed his gratitude for his involvement on the team and has no regrets from his past four seasons. He emphasizes that out of all four years of Speech, the people involved were what made the team truly remarkable.

“The work and the practice did become a bit much at times, but I mean it’s worth it for the people alone,” Golen said. “You know, the teammates and the coaches, even though they weren’t the same people year to year, they were fantastic […] York Speech Team has some of the most fantastic human beings I’ve ever met. And that’s made the last four years incredible.”