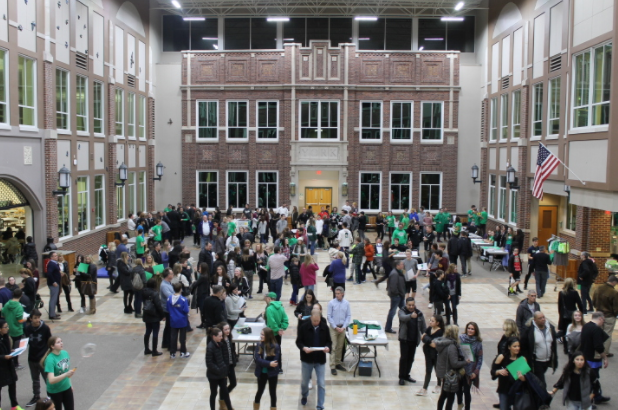 The influx of students returning to in-person learning means that many will be in the school building for the first time in over a year. While students and their families can choose to stay home for remote learning, most chose to return for the four-day schedule. (Courtesy of Luc Plaisted)

The influx of students returning to in-person learning means that many will be in the school building for the first time in over a year. While students and their families can choose to stay home for remote learning, most chose to return for the four-day schedule.

On March 15, students were given the opportunity to switch from remote or hybrid to in-person learning four days a week. With 73% of York students reporting that they came back to full in-person, many had mixed reactions surrounding the first two weeks back at school.

Many students feel better about the switch from hybrid to a four-day schedule. Some enjoy the opportunity to see and greet more people than they previously could.

“With the previous few months [in hybrid], I was seeing the same people over and over again, in the exact same spots at the exact same times every day,” senior Evan Frank said. “Whereas, now that I see all these other people, even people that I’ve never seen before, seeing them makes me feel better.”

However, while many students display positive reactions to the new in-person learning schedule, some students recognize that the difference isn’t as impactful as many hoped.

“There honestly hasn’t been a huge difference from remote,” junior Luke Lamorte said. “Teachers often still have to teach in a method of which they can teach remote students the same way as the in-person ones. While there is obviously the advantage of being able to interact with friends, I don’t feel like the classroom is as different from remote as parents think.”

With the ability to attend four days a week, some students found more stability in their routine and better ways to manage their time.

“I have found learning much easier for me and my schedule has more stability which has helped me more with motivation and time management,” freshman Isabella Pingel said. “I am very excited to be back […] with a full schedule, even if it’s only for a month and a half, and I can’t wait until everyone is back in the building.”

As students and teachers are forced to overhaul their daily routines once again, other students acknowledge that the shift to in-person learning is too little too late.

“Teachers will have to scramble to edit their lesson plans that they’ve already needed to improvise on changing several times throughout this year,” Lamorte said. “And by the time that everything actually settles back down, the year will practically be over already.”

Under these unprecedented circumstances, students realize that their high school year was far from normal. Nevertheless, the continued changes made towards a more traditional learning environment have many students optimistic about the rest of the year.

“I feel like I will be starting high school next year because I pretty much lost my freshman year, as everyone else lost their 2020-2021 school year too,” Pingel said. “But the most we can do at this point is look up, keep pushing through no matter how impossible something seems, and look on the bright side because things are getting better and I believe that it will continue to get better.”