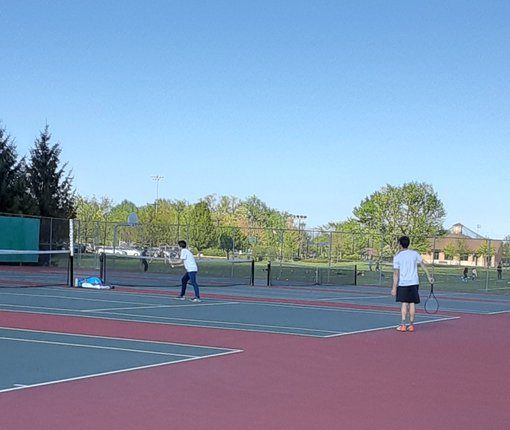 York Boys Varsity Tennis finished with an overall win against Downers Grove North. May 6, 2021. (Photo courtesy of @ydtennis on Twitter)

This April, York’s tennis team took the courts once again as they returned to play to finish out their season. Spring sports were delayed this year due to COVID-19, but were allowed to continue with new rules and guidelines to ensure player safety.

“Each player was given two tennis balls at the beginning of the season which we wrote our initials on, and we are expected to bring them to each practice/game,” senior and JV2 captain Jack Riekse said. “We are required to wear masks during practice, except when we are on the courts playing.”

Although the tennis season began later in the spring than usual, players are excited to be back training and playing alongside their teammates this year.

“It feels really great to compete again, I love playing on the team because tennis is such a solitary sport so when you get your teammates to support you it’s a really good feeling,”senior and varsity captain Gage Burkhardt said. “Obviously we missed out on that last year, so I’m really happy we ended up getting a season this year. ”

Training for the season remained largely the same for the year, though most of it was done virtually or while following COVID guidelines.

“We have always been able to practice together and this year we have scattered practices to ensure that every player gets to practice daily and that we are following social distancing guidelines,” said varsity coach Courtney Bison.

The delayed start of the season will have tennis and other spring sports continue beyond the school year, but seniors especially are optimistic about being able to finish out high school playing their sports.

“Even though our season runs into the summer, it’s awesome that we have so many athletes that want to play and are willing to spend part of their summer to do so,” Burkhardt said.