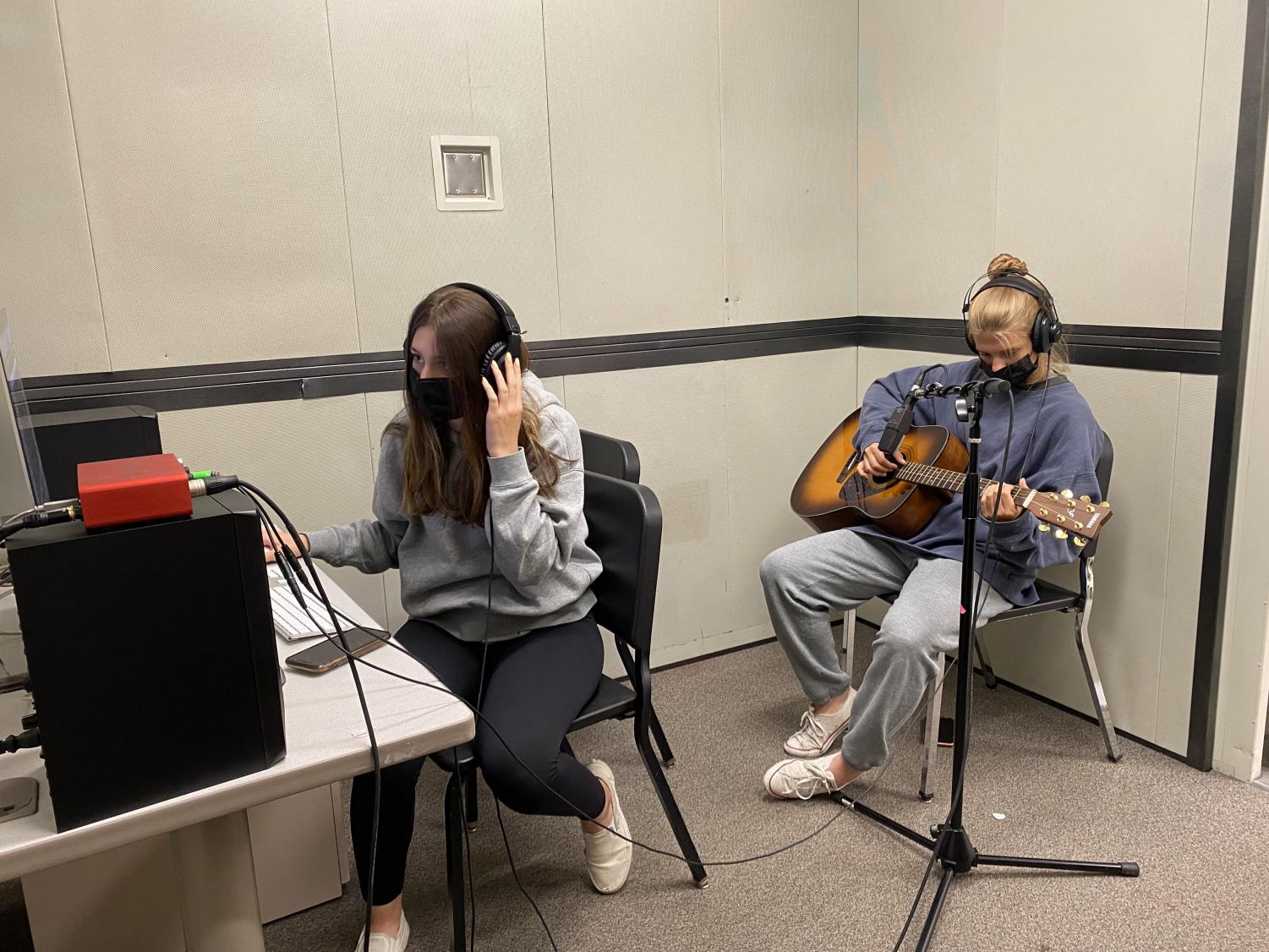 The prolific songwriting of juniors Quinn Olson and Alyssa Poli is evident from only their two short years at York. Their impact on Amateur Musicians Club, the York Album Project, and music at York has just begun. York will soon be shown their new EP.

Both singers and multi-instrumentalists, they are frequently found writing, harmonizing, and accompanying one another. Olson and Poli both play guitar and piano, but, in addition, Olson plays cello, and Poli plays flute. They started playing together at the end of eighth grade.

“[In eighth grade] We did a talent show performance together, and we sang “Shallow” by Lady Gaga,” Olson said. “We were barely friends at the time.”

Poli agreed with Olson and added that the performance was not their best.

“Looking back at it, it was rough,” Poli said with a laugh. “I hope we’ve grown since then, but, I mean, that’s what started it all.”

Music brought them together and their bond has only grown stronger after getting more involved in music at York.

“They’re two songwriters that have the luxury of finding each other at such a young age, and having a really close connection with what they love to do, how they communicate musically, and work together,” Gemkow said.

“My biggest musical inspiration is Quinn because she started songwriting way before I did, and I don’t think I would’ve gotten into [songwriting] without her,” Poli said.

Olson said that Poli was also her biggest inspiration.

Olson and Poli have influenced many others besides each other.

“I’ve actually gotten messages from people who saw them play at the collage concert,” Gemkow said. “Former students of mine emailed like, ‘Who were those two and how can I do that?’ That’s really cool.”

Recent graduate Kathryn King agrees that they are an inspiration. King was involved in Amateurs Musicians Club, York Drama, the York Album Project, choir, music production, Madrigals, and she was a vocal director for two of the musicals.

“Quinn and Alyssa are two of the most talented people I have ever met,” King said. “They are writing songs and creating music I wish I could do now as a person who is two years older than them. They make me want to work harder and make better songs and share my music with people.”

The recognition for the two songwriters has gone further than just the Elmhurst community.

Each year the Illinois Music Education Association (ILMEA) hosts a state-wide songwriting competition and during the 2020-2021 competition, both Poli and Olson were recognized for their songs on the York Album Project “Isolation.” “Rooftop Nights” by Poli won second place and “Curse of Youth” by Olson won third.

“I think they have a very mature sense of songwriting for people their age,” Audio Engineer and Music Producer Grant Mitchell said. “I think it’s just really good.”

Olson and Poli recorded their songs “September” and “Take me Back” for the fall York Album Project “The Road Home.” Returning to Mitchell, they recorded the songs “Tied” and “Headlights” from the spring album project “Finally Can Breathe.” Mitchell mixed and mastered all of their tracks. They look forward to hopefully working with Mitchell again to mix and master their EP that they will be trying to release this upcoming January or February.

For this latest collaboration, they are working tirelessly to write and put together an array of songs that represent themselves as people while they learn more about the process along the way.

“I want to get more familiar with the recording process, so I can do it on my own in the future,” Poli said. “Honestly, I just hope that people listening to it can tell that we had fun while we were making it.”

Olson agreed with her and also added her hopes for the EP.

“I hope that we don’t have any regrets [about our EP],” Olson said. “I hope that it makes us a lot better, and that we grow and learn a lot from it. I think we already have [learned], too.”

The EP will have overarching themes of heartbreak, mental health issues and the impact of toxic relationships.

“It’s been a really great outlet for toxic experiences that we’ve had, and it’s allowed us to really figure out how we feel about those experiences,” Poli said.

Olson added that she wants the album to feel authentic to them and the feelings presented in the album should be what they were really feeling at the time.

“So most of the music will be sad because we don’t want to write about happiness,” Olson said with a laugh. “At least it’ll be kind of relatable.”

Poli then had some advice for musicians or anyone who needs a push to follow their passion.

“The best thing you can do is to not have expectations for yourself and do what you want,” Poli said. “Don’t worry about anything else besides what you like and what you want to do. If you love what you’re doing, you can’t do it incorrectly.”