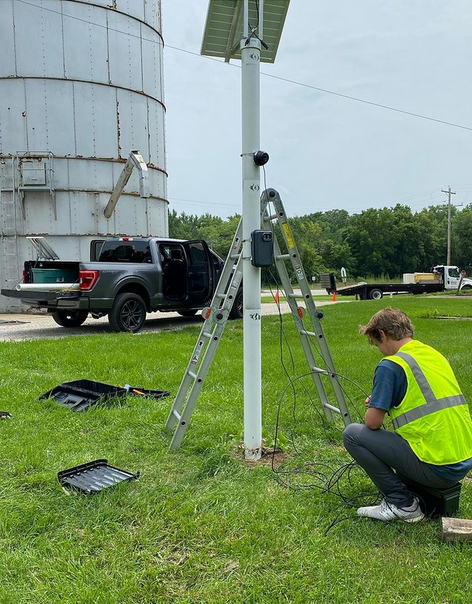 Kroy Railway Group is an LLC that originally began as part of York High School’s Business INCubator program. The class has students form groups and pitch ideas for possible companies, with the winner receiving a small amount of funding. During the 2019-2020 school year, four students came up with the idea of Kroy Railway Group. Their plan was to create a program that could monitor train activity to predict blockages before they happen, and warn first responders. Kroy won that round of Business INCubator. Since then, they developed a working machine that scans trains using lasers, and then uses a program to predict train activity.

“Right now we have a LiDAR sensor along with a camera,” Co-Founder Connor Polomsky said. “The camera runs photo recognition and the LiDAR [laser] picks up the velocity of the train. It took us about a year to get our first unit developed, and from there we made hundreds of tiny changes to it. We still have a lot of work to do, but we’ve come a long way.”

While the members of Kroy had an idea of what they wanted to accomplish, the logistics of building a product that could get data from trains and then a program to process this information was beyond any of their technical expertise. While the team originally applied for a grant to access train schedules, it was denied. In order to make a product that could still achieve their goals, managers at Kroy reached out to individuals with more knowledge of the hardware and software they would need for such a project.

“We went through a hiring process for software engineers,” Co-Founder Barry Carta said. “We originally worked with Audrey Tkach, a software engineer in New York. She was a consultant for us, and she helped us vet certain software engineers who we wanted to work with. To get where we are now we work with two or three guys in Chicago who work for Ascend Engineering. On top of that we have a couple hardware engineers, a patent lawyer, as well as some legal counsel.”

After developing working units, Kroy began to receive attention from towns interested in using their technology. One of these was the village of Barrington, who dealt with an increase in railway traffic.

“Barrington reached out to us through the DuPage Railroad Safety Council,” Polomsky said. “That was because of the CN [Canadian National] acquisition of KCS [Kansas City Southern]. And what that brings is new kinds of traffic on the railroads, especially in Barrington. What they were looking for from us was new data, so we put up a sensor out there, and we are able to look at the trains coming through.”

When looking at Barrington, the members of Kroy realized there was an issue preventing them from installing their units. Of the locations suitable for use, none of them had access to an outlet, meaning the sensor could not receive power. As a solution, Kroy developed their first solar powered units.

“Solar is more for locations where we won’t have access to power,” Carta said. “We put up an installation in Barrington as we were doing a data collection project for them. In that case there wasn’t an outlet nearby. If we want to look at widespread use of these units and there’s a remote location or a building that doesn’t want to give us power, the solar unit is the most sustainable and universal way of providing power to the unit.”

Now that Kroy Railway Group has units, the focus is on licensing out their services to different companies. By working with established groups, the goal is to utilize a broad network of towns and emergency responders.

“We’re switching our aim to partnering with other third party sources,” Carta said. “We were introduced to a company called FlowMSP. They do work for fire departments across the country, and they do have somewhere between 250 and 300 departments in their network. We talked with them about potential partnerships we can form with these other companies where the service we provide is an extension of the services and networks they already have. So we plan to license our service to other third parties.”

While all of Kroy’s members have been living in Elmhurst so far, the two managers, Barry Carta and Connor Polomsky, will be moving away for higher education. However, the team is confident that they will be able to continue operations without physically being together.

“The majority of the stuff we do now is all online,” Polomsky said. “But we’ll also have Chris [Markuson] here, and Chris is a senior, so stuff out in the field, like hardware fixes and installation, he’ll be able to do that, as well as our mentor Jim Dondlinger who lives around here.”

For well over a year since they won the Business INCubator program at York, the team has been hard at work developing a working product. As Kroy continues to grow as a business, its members hope that they can get their service out to more towns where emergency responders have to deal with train blockades.

“I would like to say that the Business INCubator program at York, it’s amazing,” Carta said. “That’s where we really started in this whole thing. Along with the mentors provided, I think the network is one of the most amazing things that you can build. As far as the company, I just really want to be able to follow the journey. Our team is really excited about where we’re going with it all, as well as the effect that we think it could have. Just two days ago we had our first test in Elmhurst trying to predict the blockages and we could tell down to the second how long a blockage would pass. We want everybody to be following along to be as excited as we are.”