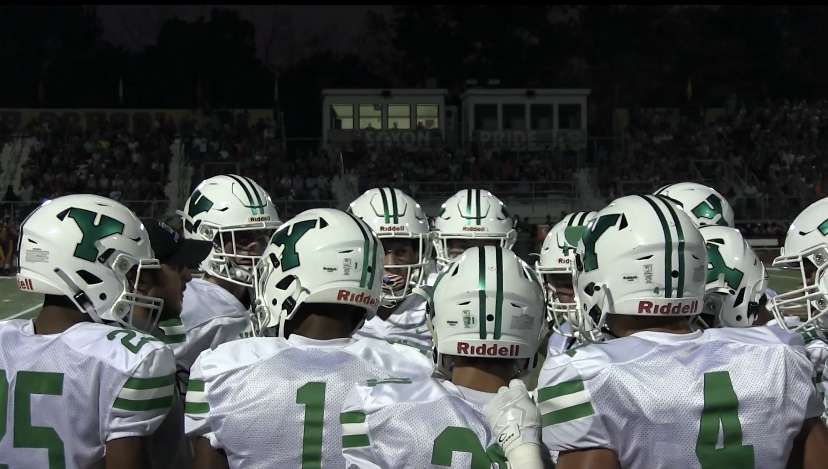 The York Dukes getting ready to break the huddle and continue their success they have strung together all game against the Saxons. (AJ Swiatek)

The York Dukes getting ready to break the huddle and continue their success they have strung together all game against the Saxons.

Following the Dukes’ first winning season in a decade, the football team was well aware of the unfinished business from years past; which was more than apparent last Friday. The Dukes Varsity Football squad downed the Saxons by a final score of 37-7, and the potential of breaking their 12-season playoff drought has the players as excited as ever.

“It felt amazing to beat Schaumburg by such a large margin,” linebacker Aidan Nawrocki said. “It really goes to show that this team is capable of anything. Offensively, we will be able to win every game this season [if we can continue to score like that]. It was also a great day defensively and I am very happy with how we came out to play week one.”

Nawrocki certainly isn’t the only Duke who was pumped to see a lot of things go right this Friday. Senior Jeffrey Coglianese shared his thoughts  on the Dukes’ exciting kickoff to the year.

“I feel like [the game] gave us the confidence we needed moving forward,” Coglianese said. “It was awesome to open the season with a big win and I expect this momentum to carry forward in the coming weeks.”

Momentum is a constant story line in not only all high school sports, but in sports as a whole. Star wide receiver Kal Harris was well aware of the confidence that will continue to grow as the season progresses.

“After all the hard work and preparation we put into the opener, it felt great to come out of the gate with a great win,” Harris said. “The fans should expect no less this week versus Morton, as we are extremely confident going into the game.”

In the 30 point victory, arguably no one was more prevalent than wide receiver Charlie Specht. Specht had multiple big plays including a game-changing touchdown down the sideline that really set the Dukes apart. He, too, is ready to see the Dukes do some damage.

“I have no doubt in my mind that we will consistently be the most prepared team on the field,” Specht said. “Our entire team is fully committed to changing the ideology that York is some soft cultured team and we are ready to make a playoff push.”

After a promising win over the Saxons, the Dukes have a lot to be excited about. The Dukes’ next game is against J. Sterling Morton this Saturday, Sept. 3. A win against the Mustangs is just another step in the right direction and having fans there to cheer them on will make it all the more magical.