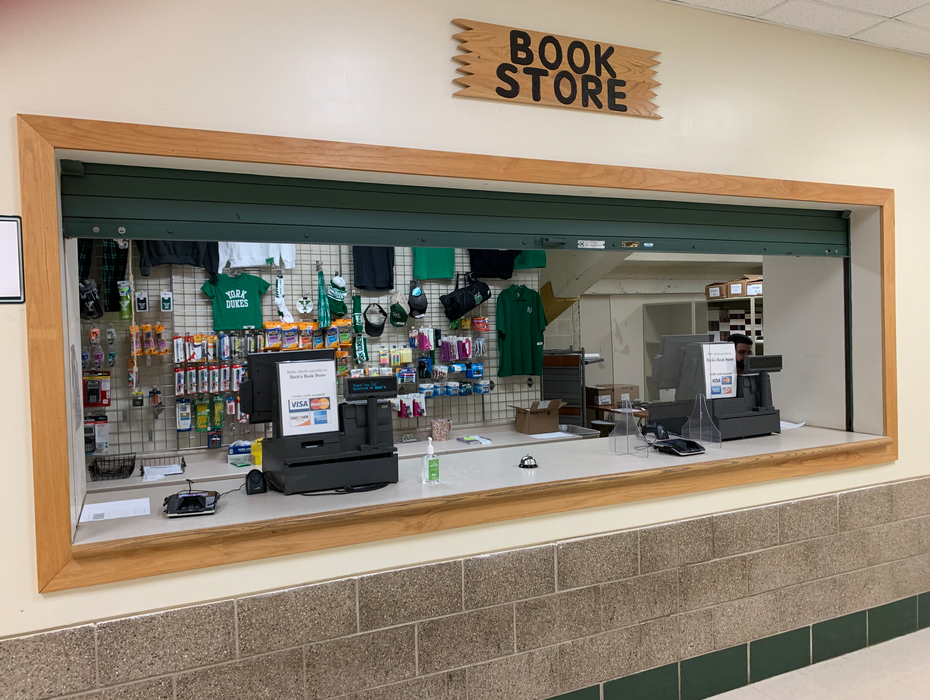 Beck’s Book Store, located outside the York commons, provides school supplies such as gym locks and uniforms for students.

Beck’s Book Store, located outside the York commons, provides school supplies such as gym locks and uniforms for students.

Students face a shortage of supplies for Chromebooks and gym equipment as distributors fall behind.

The majority of current freshmen as well as transfer students at York are using “loaner” Chromebooks from previous years while they await shipments of new models. In prior seasons, freshmen would pay for and receive Chromebooks before the start of the school year. However, due to internal issues within the Elmhurst 205 Technology Department, the computers have not yet been sent from their suppliers. Alongside the shortage of Chromebooks, students are also having similar problems with gym uniforms and locks.

“All of the uniforms and locks are back-ordered from the companies,” Beck’s Bookstore manager Jim Serio said. “I talked to the sales representatives and they’re saying that because of the pandemic everything is taking longer to get in. This includes getting stuff in stock, shipping, everything is taking longer. The locks are also custom-made so they’re specific locks that we have to buy for the school, so these orders take longer because of that too.”

Although many have not, some students have been able to purchase uniforms and locks as supplies come in. This stands in stark contrast to the Chromebooks, for which nearly all students looking to get one have been unable to do so. Instead, the freshman class is using Chromebooks recycled from previous years.

“The freshmen are all on loaners,” TSI member William Chiampas said. “They have some that were used as fifth grade devices and some that are from storage. We were also supposed to get rid of a lot of Chromebooks but then we really couldn’t, as we underestimated how many they needed.”

Providing computers for all students was a difficult challenge for the district. There was a need for several hundred Chromebooks, which far exceeded the traditional amount of “loaner” computers stored at York TSI.

“Because the Chromebooks are coming late, we had to find 500 to 600 Chromebooks to use for the incoming freshmen,” Ryan Gooderham, Elmhurst 205 Technology Department summer employee said. “I understand there were a lot more Chromebooks than anticipated that needed to be given out, so we had to go back and use about 130 of the Chromebooks that were going to be scrapped because we didn’t have that many on hand.”

While the tech department was able to provide all students with a working Chromebook by using models from previous years, this created a new issue. Many of the computers traditionally given out by York TSI as “loaners” for students waiting on repairs had been given away, creating another shortage.

“We have a few old Dell Chromebooks for extreme scenarios where someone breaks their screen or cannot physically use their computer,” Chiampas said. “But if it’s something that involves keyboard, speakers, track-pad or something where the issue can wait for about a week, we’ll just let them hold on to their Chromebooks and then they’ll get a pass from us when their part is ready and we can fix it on the spot.”

It is unclear as to when the gym supplies or Chromebooks will be more readily available for students. However, for both situations, it may be a considerable amount of time.

“I talked to a couple parents that have kids at Bryan Middle School and they said they didn’t get their clothes at all,” Serio said. “We use a different company than they do, but in general a lot of companies are just taking longer to get in stock. One of the main reasons is that just because of the pandemic things are in short supply, so it takes longer to get items in stock and to ship. It doesn’t matter what the quantity is when you order it, it’s just going to take longer than normal.”