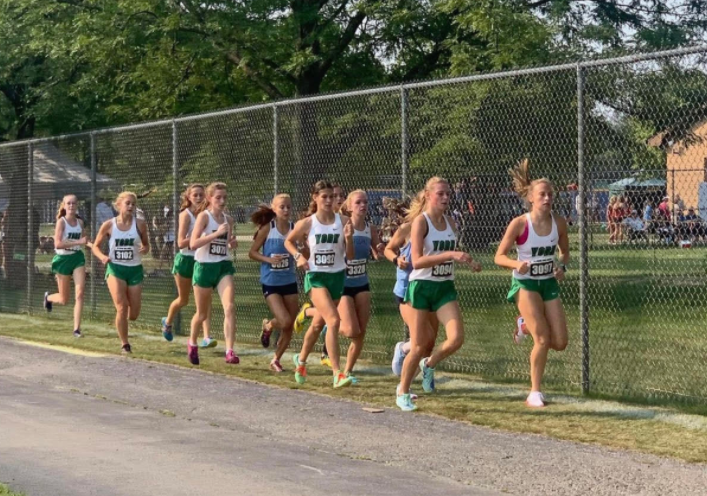 A group of seven York girls dominate at the Lake Park Invite. (@yorkgirlsxc)

A group of seven York girls dominate at the Lake Park Invite.

Girls Cross Country off to a sprinting start

The girls cross country team started their season strong after a triumphant win against Proviso West on September 2nd. The team went undefeated in the freshman/sophomore, open, and varsity races, Saturday the fourth of September, at the St. Charles invitational, earning first place as a team across all levels.

It was the group’s first invitational back after a full year of small, duel meets during the pandemic season. During the summer, the girls put in the work at summer camp, running everyday, and now, they’ve found their hard work to pay off.

“I think we are looking really good,” JV runner Kathryn Castanoli said. “The entirety of the team has been putting in one hundred percent effort during practice everyday.”

The team currently ranks number one in the conference, showing great potential for the season.  York proved their dedication and determination by dropping their times and winning at all levels in the St. Charles invite and placing first for varsity and JV at the Lake park invite.

“I think we’re going to do so incredible, especially my group three girls, who have had the most improvement they’ve had in all four years,” Captain Lucy Baird said.

This season watching the girls dominate on the course this year will be exciting. The team and coaches are ready to see all their hard work pay off. The team values taking care of each other and working as a team to succeed.

“Based on the results from last week, I think that the team has potential to be one of the strongest York cross country teams in history. I believe that the goal of winning at all three levels in conference is definitely attainable.” Head Coach Lauren Deangleis said. “I also think going after that state title is one hundred percent attainable. I think the entire team is dedicated to the little things and they are really dedicated to the hard work and progression, the process and to each other. I think the ingredient that makes us above and beyond other teams is the commitment to each other and holding each other accountable and responsible and doing the right things and making good decisions and supporting one another throughout the season.”