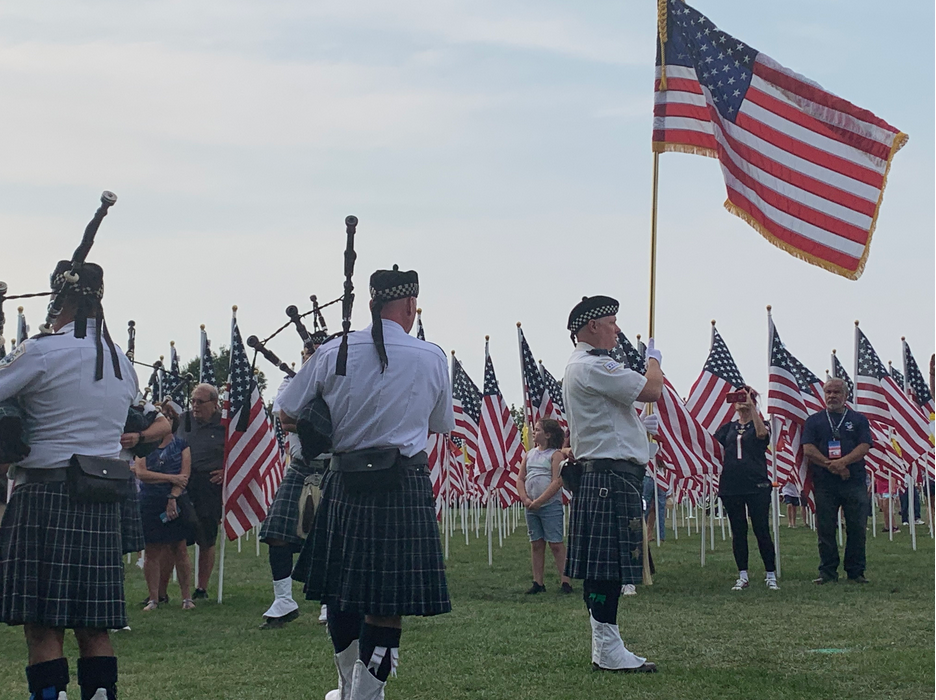 The Bagpipes & Drums of the Emerald Society, a group that specializes in musical performances for police and firefighter memorials, honors the lives lost on September 11, 2001.

The Bagpipes & Drums of the Emerald Society, a group that specializes in musical performances for police and firefighter memorials, honors the lives lost on September 11, 2001.

Members of the Chicago community gathered in Oakbrook on September 12 to commemorate 20 years since the September 11, 2001 attacks.

The Memorial Healing Field, organized by York Building Manager Jerry Christopherson, saw nearly 3,000 flags wave in honor of the victims and first responders of 9/11. The flags stood center during an event that took place during the afternoon of September 12. The ceremony involved musical performances by the Butler 53 School Choir, York High School Band and Choir and the Emerald Society. Alongside the music, there were three speeches from survivors of 9/11. Those affected by the attacks spoke of how beautiful the day started, with clear blue skies and a welcoming atmosphere.

The speeches consisted of survivors from the World Trade Center and the Pentagon, as well as a surprise presentation from a New York firefighter who responded during the attacks, Scott Shrimpe. The talk was originally unplanned, but upon learning who he was, organizers asked if he would be willing to address the crowd.

“About 15 minutes before the start of our closing ceremony I met this amazing hero, Scott Schrimpe,” True Patriots Care president and event organizer Jerry Christopherson said. “I asked if he could share his story with everyone in attendance. He agreed but wasn’t sure if he would be able to talk without getting emotional. But he did an amazing job and everyone was able to get a first hand story about 9/11.”

Schrimpe spoke of his own situation during the September 11 attacks, as well as the many lives lost by his fellow firefighters both due to injuries and sustained medical issues down the road.

“We made a promise to the widows that we were gonna bring our brothers home,” Schrimpe said. “It’s just like the military, we don’t leave anyone behind.” […] “We’ve lost 268 firefighters since 9/11 to different types of illnesses such as respiratory illnesses and different cancers. With police officers and residents of lower Manhattan we think the number was closest to 6,000 deaths from 9/11, whether it was on that day or 20 years later.”

The Memorial Healing Field was the culmination of hard work and planning from many in the Chicago community. While the event was intended to foster remembrance of all of those who lost their lives, an emphasis was placed on using this tragedy to move forward 20 years later.