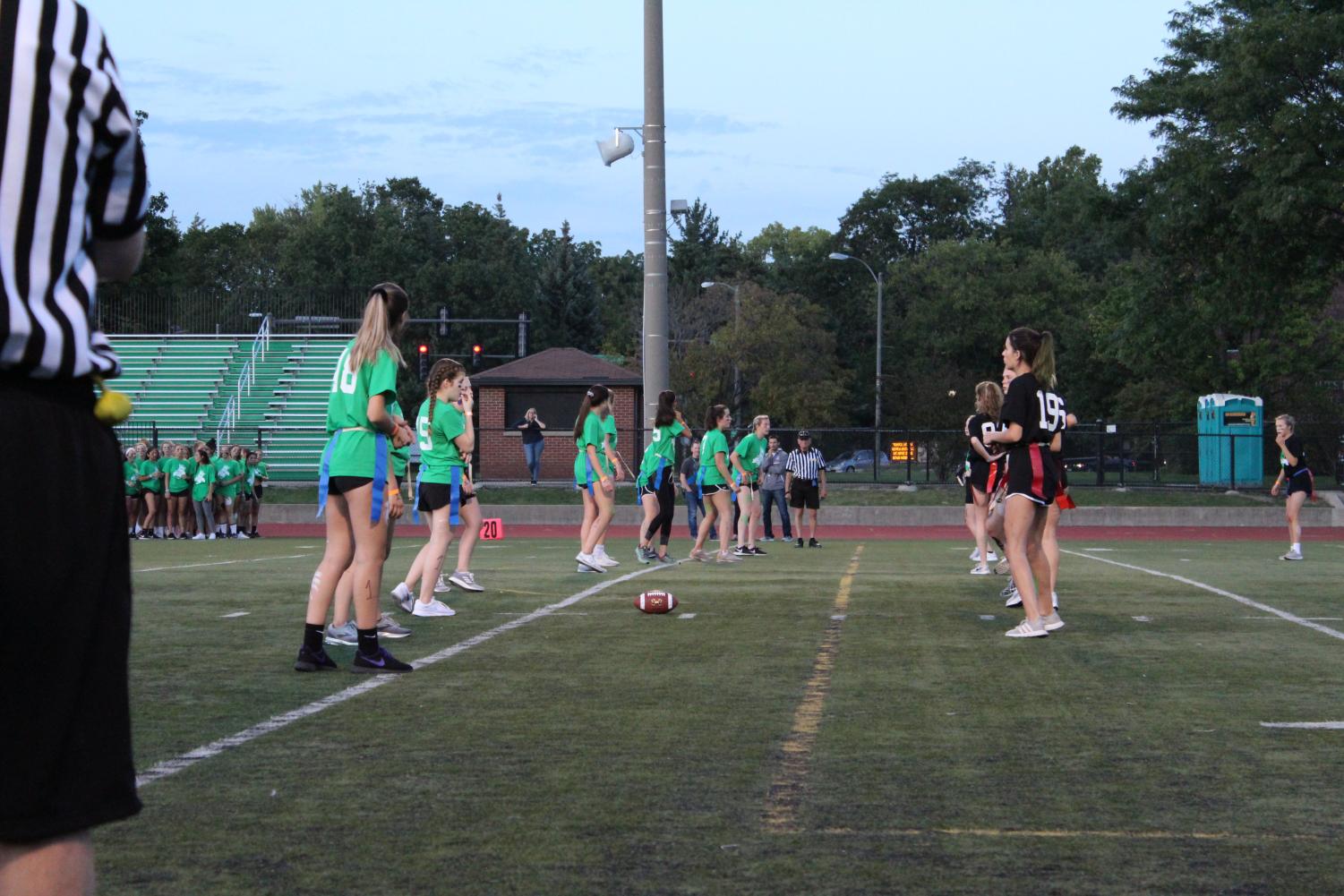 Juniors and seniors get prepared for to play in the 2019 flag football game. (Photo by Jack Castanoli)

Juniors and seniors get prepared for to play in the 2019 flag football game.

Student Council has made the decision to change the name of the senior and junior girls flag football game. It was previously known as the “Powderpuff Game,” but has since been changed to Girls Flag Football. The game is an old and long-lasting tradition that started in the 1940s. The game is named after a powder puff: a large fluffy brush used to apply makeup. With the changing times and the greater awareness, the York student council and administration decided that there needed to be some updates to the homecoming traditions, as we evaluate and consider the world around us, York as a whole has made great strides to sit with the uncomfortable fact that some traditions are tangled in outdated stereotypes and ideas. Specifically the Powderpuff  name is included in ideas about women that we can not recognize are based on values that York no longer wants to hold up as appropriate.

“The name ‘Powderpuff’ is dehumanizing and marginalizing to women,” Lindsey DiTomasso, women’s studies teacher and Empower Club sponsor, said. “When you look at a powder puff it has the connotation of being decorative and superficial. We have to ask the question: what is the audience there for? Are they there to make fun of women playing the sport of football, or are they there to watch their athletic talents?”

The history of this name centered on entertaining the student body based on archaic stereotypes,when the focus should have been on athletic prowess in line with mens sports. When York realized the history, it was determined that it needed to be updated in order to align with York’s current ideals.

“Administration was aware of the history and meaning behind the name and really pushed for Student Council to make a change,” Student Body President Erin Lindgren said. “We tossed around a couple of different names this year and we decided Girls Flag Football would be something that ensured that everyone would know what it is, and it also strays away from the traditional name ‘Powderpuff.’”

Typically, students are the ones that encourage and expedite change; however, in this situation, that was not the case. The administration was the driving force behind a new name. The majority of students at York were not aware of the significance of the name Powderpuff. No one ever examined the name because it was something that everyone was accustomed to.

“Before this year I really didn’t hear anything about the significance or meaning around the name Powderpuff,” Kenn Connell, junior, said. “I think it was really only after they changed it that I think people started talking about why it was harmful. A lot of my friends and people I know thought it was actually named Powerpuff or was named as a spin-off of the Powerpuff Girls. Not necessarily realizing what it was named after and not truly understanding the connotation of the name.”

Their are many traditions at York that up until now were considered the status quo. York is always trying to improve itself and grow in order, but this year more than any other York as a whole in their student body and staff, took the time to reevaluate their traditions. It takes a lot of effort in order to change, but York is always working hard and trying to take steps forward in order to create a safe space.

“I always say to my students it’s easy to not care if you do not know what’s going on,” DiTomasso said. “Sometimes we marry the narrative we hear, which is, ‘it’s just that Powderpuff game’ so it comes down to how closely are we look at that name. People go along with it because that’s what they’ve always known.”

This year more than any other, is a great time to make changes. During quarantine, everyone had a chance to take a step back and analyze the choices they made. Many people decided to use quarantine as an opportunity to educate themselves on current events. The awareness in how we think about and discuss womens sports is just one of these many changes. Not to mention that following so many things were forced to change, so the year is already filled with adaptations

“I think that this year is a good year to make some changes just because we didn’t have the events last year,” Lindgren said. “Coming back made it an easier time to make some modifications since we already have to make so many changes for COVID it’s easier to slip them in I guess.”

This change is a step forward, but in order to keep this momentum, society needs to continue to push for change and use this growing awareness to question the status quo. York is constantly trying to grow as a community to be a safe and accepting place for everyone. It is very important to York to try to accommodate everyone while still maintaining the atmosphere and traditions that are ingrained into the community.

“Some traditions need to change whether that’s from a logistical standpoint with covid or if that’s from current events and society,” Lindgren said. “Just being aware of what we do and what we say and how it impacts the student body and the community, is so important, I’d say we are attempting to participate in an era of change while still trying to preserve the traditions of York.”

How is this accomplished, how does one make sure that they are doing the right thing? The most important thing is that you are asking the question. As long as you are asking yourself how you can help, and reevaluating the situations you are surrounded with, progress will continue to be made.

“Everyone should be thinking: What role do I have in accomplishing change?” DiTomasso said. “My first steps, my role would be to educate and inform myself on the issue.”