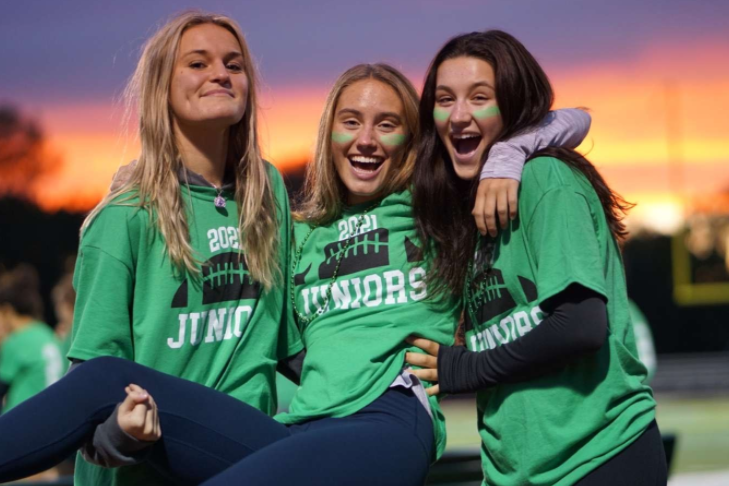 Junior girls celebrate a win at the annual Girls Flag Football game against the senior girls. The flag football game is a vital part of the Homecoming traditions. Pictured left to right: Mathilde Cronin, Megan Brandt and Ashley Simonis. (Photo by Nate Stettin)

Junior girls celebrate a win at the annual Girls Flag Football game against the senior girls. The flag football game is a vital part of the Homecoming traditions. Pictured left to right: Mathilde Cronin, Megan Brandt and Ashley Simonis.

Students and staff react to the return of the Homecoming Dance

The Homecoming Dance is a part of York’s long standing culture that students and teachers look forward to every year after the Homecoming Game. After being online for most of the first semester of the 2020-2021 school year, Homecoming was one of the most missed traditions from the remote year.

The planning process to make sure that we hosted a Homecoming dance looked different for Student Council this year. Since the spread of COVID-19  is still prominent in schools, Homecoming was bound to have new protocols than in previous years.

“We’ve had to make changes to accommodate dancing outside, which is a challenge that all of our neighboring schools are tackling this year,” Matt Moran, Student Council advisor, said.

The return of Homecoming inevitably made students and staff excited about school life returning to normalcy. Whether it is the spirit week leading up to the football game or the festively themed dance, a feeling of relief swept over everyone when the Homecoming Game and Dance was officially announced.

“I think that because we were away from [Homecoming] for so long, people are looking forward to being invested in something again,” Matthew Johnson, math teacher, said.

Besides the last school year, York has had Homecoming every year without fault. With the absence of a Homecoming Game, Dance and pep rally last year, students found difficulty approaching school involvement.

“I think that everyone used to get involved a ton that has been hard these past few years,” Johnson said. “Hopefully in the future with people coming back to school the involvement will go way up.”

Drew McGuire, assistant principal, expressed some key details about our Homecoming dance. Plans made towards the dance were formed with the safety and interests of students in mind.

“We’re going to have a DJ, we’re going to have a shaved ice truck,” McGuire said. “The dance will be outside in the parking lot and we’ll have the fieldhouse open. We will have games in there; we’ve got mini golf and battle drums. We’ll also have some photo booths. We want to give you a place to go to have a good time in a safe manner.”

The return of the dance and the tradition has allowed people to feel like they are getting a normal high school experience after an abnormal year and a half.

“It feels so good to start getting back into what school is supposed to be like,” junior Paige Greve said. “It is nerve wracking though because it is the first big event that [students] will be going to.”

Students and staff together have been looking forward to returning to what school is supposed to feel like, and Homecoming is a great start to what the future is holding for York.

“I’m just glad we’re able to have a Homecoming this year,” senior Vanessa Jimenez said. “Even though it’s going to be outside, I think we should give [homecoming] a chance because at the end of the day, it’s how you make the most of it.”