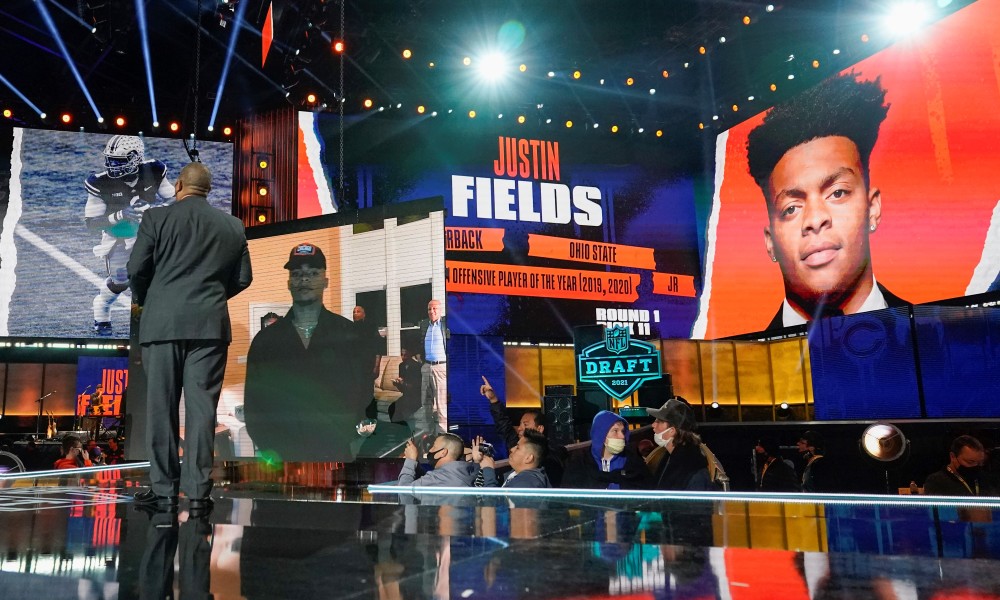 Justin Fields wait comes to an end, as the former Ohio State Buckeye takes his next step to the NFL in the Navy and Orange. (USA today sports)

Justin Fields wait comes to an end, as the former Ohio State Buckeye takes his next step to the NFL in the Navy and Orange.

Thursday, April 29th, 2021. The National Football League (NFL) Draft started the same as any other. With the first three picks, quarterbacks Trevor Lawrence, Zach Wilson, and Trey Lance went off the board respectively. Bears fans watched and hoped, praying a player of that value would fall to them at pick 20. But picks went by, and once renowned second overall picklock Justin Fields continued to fall. Kyle Pitts, Ja’Marr Chase, Jaylen Waddle, Penei Sewell, Jaycee Horn, all off the board. All of a sudden John Elway and the Broncos are in a position many deemed impossible, as the oh-so talented Buckeye was still on the board. But the Hall Of Fame quarterback went with Alabama corner back Patrick Surtain II.

All of a sudden, Bears fans across the world are glued to their TV’s as the rest of the board is not as quarterback-needy as themselves. Then; the Eagles trade up. I was at a Buffalo Wild Wings just outside of Chicago, and when this trade was announced you could hear a pin drop. The Eagles (lead by recently hired Head Coach Nick Sirianni) seemingly wanted a fresh start. Jalen Hurts wasn’t the guy. Thoughts were swirling. And as the pick was submitted, Bears fans practically couldn’t even watch. Devonta Smith. The Eagles have moved up for wide receiver Devonta Smith. And soon thereafter another trade went through. This time, the infamous trade chime played on the television, and the Bears logo popped up. With the 11th pick in the 2021 NFL Draft, the Chicago Bears selected Ohio State quarterback Justin Fields. But that was only the beginning. When moving up for a quarterback, the staff of said team can expect a fair amount of expectations. But the Chicago media is like no other. Bears fans made it clear who they thought should start under the helm in week 1, and it certainly wasn’t newly signed quarterback Andy Dalton. And as Fields continued to shine in his NFL preseason debut, expectations grew even higher. But Dalton would start week 1. And said the start would not be too pretty. Dalton went 27/38 with 219 yards, 1 interception, and no touchdowns. Meanwhile, in his 3 plays under center, Fields was a perfect 2/2 with 13 yards… and a rushing touchdown.

And that leads to today. With head coach Matt Nagy and general manager Ryan Pace’s jobs on the line, they have never been tasked with such a large position. On one hand, fans argue the Bears shouldn’t rush Fields into action before he is NFL-ready (as many felt that was what ruined their former quarterback Mitchell Trubisky’s development). Although said fans will admit that Dalton clearly isn’t the long-term answer, they will lobby that protecting Fields is more important than getting him into action from the get-go. However, the rest of the fanbase feels they have seen enough from Dalton, and want to see their new shiny toy on NFL Sundays. One way or another, this decision will likely be the driving force in decadent the state of dozens of jobs within the organization.

The Chicago Bears faced off Sunday, September 19 against the Cincinnati Bengals.  Dalton started, but got hurt midway though the second quarter. Fields came in the game and pulled off the win with the final score of 20-17. Dalton looks to be out the next couple weeks and Fields was the starter vs the Browns on September 26th.