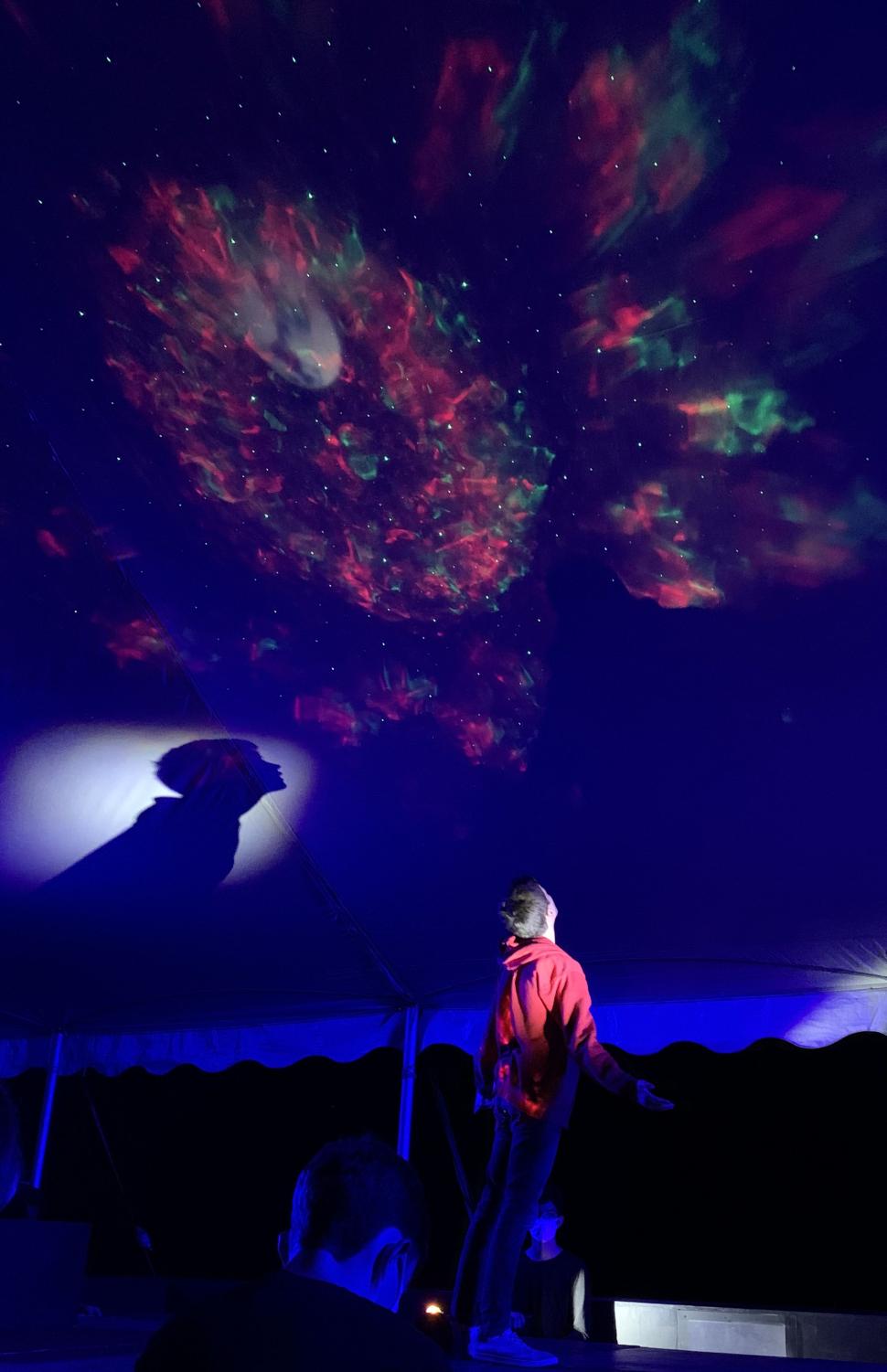 Senior Owen Espinosa, who played Christopher in “The Curious Incident of the Dog in the Night-Time,” captivates the audience during the show’s opening night. (Photo by Paige Greve)

Senior Owen Espinosa, who played Christopher in “The Curious Incident of the Dog in the Night-Time,” captivates the audience during the show’s opening night.

Fall play’s magic is anything but “Curious”

Attending the opening night of York’s newest production The Curious Incident of the Dog in the Night-Time (Curious), I wasn’t sure what to expect. First, it was outside and freezing even for me who had two jackets on at one point. Second, it was the first production that York has put on with an audience in almost two years.

The director, John Forysthe, used parts from the original show, but at the same time had to make the show suitable for a high school production. They didn’t have the true visual effects that were praised in the real show, but it didn’t matter. In some things that they lacked, they made up for it in acting.

The main character Christopher, played by Owen Espinosa, is on the Autism spectrum. Espinosa played every scene that he was in beautifully. From the spot on British accent to the emotion that Espinosa showed playing a character on the spectrum to even the final scene where he walked the audience through how to do a math equation, Espinosa earned all the praise that he was given.

It wasn’t just Espinosa who shined; however, the supporting cast stole some of the best scenes from the whole production. Aiden Costanzo, who played Christopher’s father, Ed, shined in almost every scene that he was in. Whether it was when Ed admitted to killing Wellington or the scene where Ed begged Christopher to stop with the investigation, Costanzo put a lot into his character and received positive feedback.

Forysthe added a vocal ensemble and staged the play outdoors to add in his own creative elements. Throughout the play, the vocal ensemble would make the sound effects that an audience member would normally hear from a speaker. I saw the show twice. Once on opening night and again on the Saturday showing. On the first night, I sat right in front of one of the vocal ensemble members, and when he hit that piece of wood mimicking a knocking of a door, I definitely jumped a little bit. After you get past the surprise factor that the ensemble brings, you enjoy hearing the sound effects. Whether they were bystanders in a train station or a dog barking, they were responsible for the ambiance and environment of each scene and executed each with poise and precision.

The movement ensemble was also something that was not in the original script. At the start of the show, I thought they were just some of the extras of the cast, but then a scene in the first act shows that members were playing a coat rack, refrigerator, and even a microwave. They definitely got a kick from the crowd who, without a doubt, was not expecting it. The show was outside, in the dark and cold weather, and it would have been nearly impossible to get real props. In my opinion, using a movement ensemble was better anyway; it made the show more interactive than if it was just regular props.

Overall, York Drama’s returned to in-person performances without missing a beat. The experience, the cast, and everybody whose hard work and dedication went into this show is what made it as special as it has become. Thank you to the cast and crew of The Curious Incident of a Dog in the Nighttime for putting on a beautiful and insightful performance.