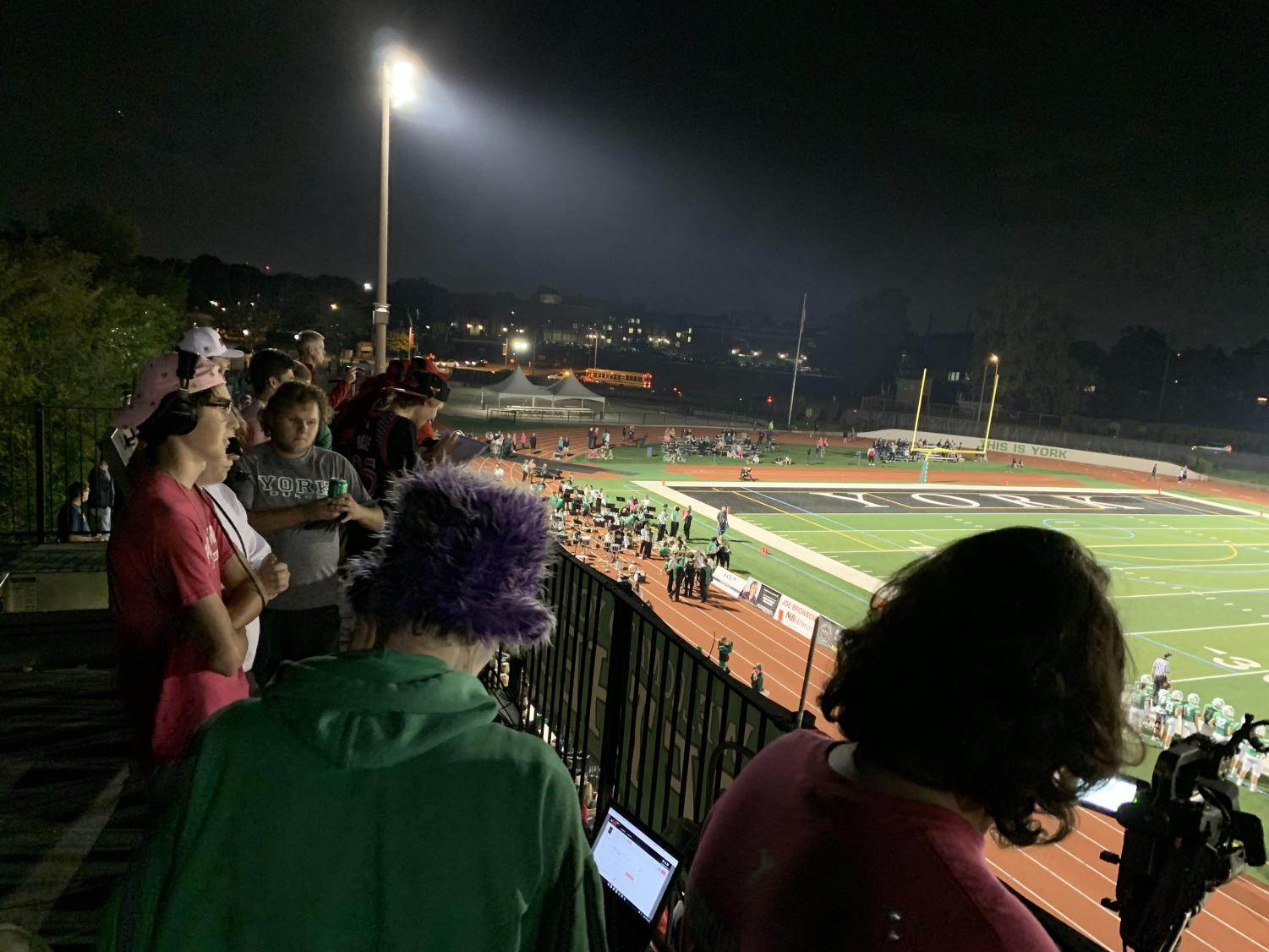 During the current high school sports season, fans of York’s teams have watched a variety of events live-streamed on Youtube from the comfort of their homes. This is all thanks to York Sports Network, a group of students who meet multiple times a week to broadcast and commentate high school sports such as football, baseball and swim.

“YSN started when Bobby Hessling [graduated in 2021] wanted to stream games for the season during his sophomore year, notably football and basketball,” YSN and York TV advisor Brendan Chambers said. “We already had some equipment to do live-streaming, though it was a pretty simple production then, and I brought Bobby up to the press box and allowed him to provide color commentary over a Friday Night Football game. He then brought a friend, Gavin Hughes, and found that the two had a natural inclination towards sports commentary.”

Over the years, YSN has expanded to covering a broader scope of events, and has grown the size of its team. There were some issues regarding sports games during the peak of the COVID-19 pandemic when many school sports were not taking place. However, pandemic grants provided a new opportunity for funds and equipment and the demand for live-streamed sports games increased as quarantine measures went into effect.

“I think the pandemic has been terrible because people cannot play sports, but it’s also brought us a lot of following and a lot of new equipment through grants that I don’t know if we would have gotten if we did not have a pandemic,” YSN co-president and executive producer Jack Borchers said.

Now, alongside announcers, there are camera operators, producers and even a statistician. The group of roughly 15 students cover events both at York as well as other schools to stream live on their Youtube channel, “York Sports Network”.

“Going into the year the only returning members of over a year were me and Jack Borchers,” YSN co-president Alexander Swiatek said. “It was really vital that we not only retained some of the sophomores from last year who are now juniors, but we also needed to get a solid group of guys and girls together who were passionate about York Athletics. We’ve really been able to find people interested in the York Sports Network and find roles for them to make an all-inclusive club I’m proud of.“

Although many of the students involved with York Sports Network take a broadcast class such as YTV, the group is considered as a separate club that anybody can join.

“YSN works with YTV in that we are using the same equipment and a lot of the filming and capture skills in order to produce the event,” Chambers said. “However, the technical components are actually very different as a set-up for a live-stream uses very unique technologies that our YTV students simply don’t need to utilize.”

Due to the fact that YSN operates as a separate club outside of class hours, it relies on individual volunteers who want to learn more about sports broadcasting. Some of these students have no prior experience.

“One of my buddies does the stats and one day he asked me if I wanted to help out with YSN,” senior Alejandro Cerdas said. “I was like yeah that sounds fun, so I came for one game and I helped out with calculating the downs and keeping track of which team scored for the YSN live stream. I enjoyed it pretty well. I think there’s two more games left, and I know I’m going to have a great time.”

Now that YSN has established a strong base to work with as well as a steady following on Youtube, the focus is on recruiting more people to the program. Varsity football and basketball games both have a large number of students willing to help, but more crew members are needed for less popular events, especially women’s sports.

“Recruiting for some sports has been kind of hard, and it’s been that way since the start of the year,” Borchers said. “It’s especially a struggle finding people that don’t want to be on camera, or that don’t want to be in the talent roles announcing behind the microphones. Finding the people to do the other work behind the camera has been a struggle since the start. Most people currently are part of YTV or part of a broadcast course already. We’re trying to work on getting more people in so that we can handle more things and have a better operation.”

Despite needing to bring more people into the program, the core team at YSN has attracted a large following this year. So far, the football game streams are the most popular, receiving around 2,000 views each. As the winter approaches and YSN shifts their focus to sports such as basketball, the students are working hard to ensure everything runs smoothly.

“I can’t stress enough that YSN is student run, from top to bottom; while I can provide the equipment and a little bit of the structure, the students are the ones who make YSN and YTV happen,” Chambers said. “The whole of the YSN crew are the ones who deserve all the credit this year for being on the sidelines every game, for hours before and after, to ensure the production is professional-looking and the equipment is treated with care and respect. I am so proud to be associated with the students of YSN and can’t wait to see what the future brings.”