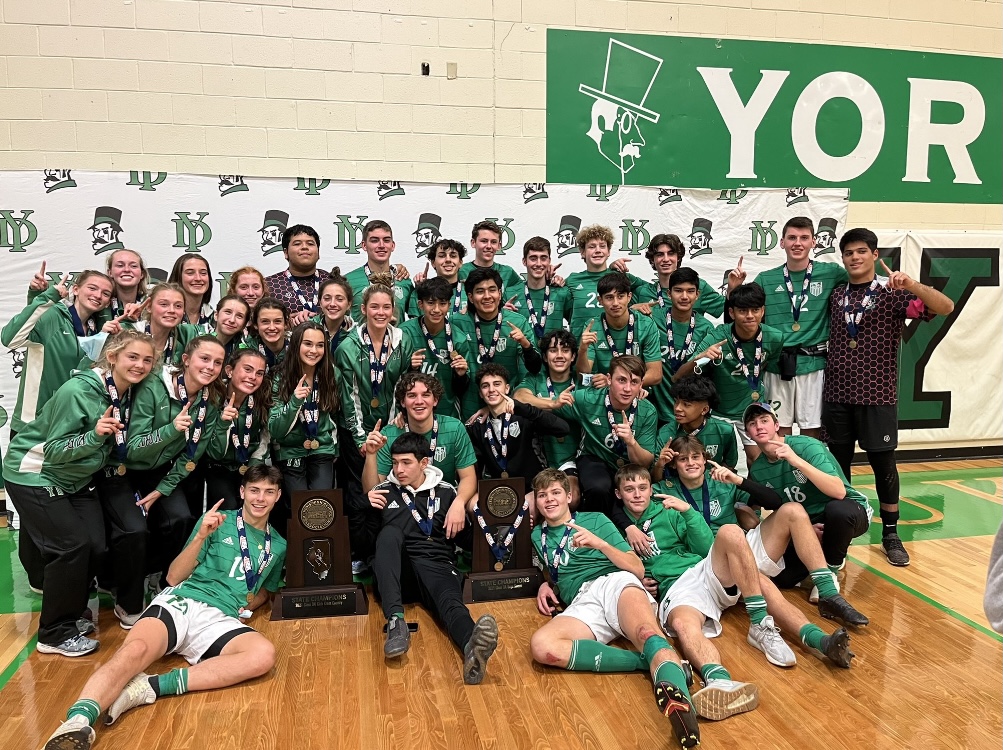 Both the girls cross country team and the boys soccer team take home the state trophy on Saturday. “The 2021 State Team is a true reflection of what this community is all about – family,” girls cross country head coach Lauren DeAngelis said. “York High School has a rich athletic tradition and it takes support from everyone in a community to help these athletes achieve their goals.” (Courtesy of York Athletic Twitter)

Both the girls cross country team and the boys soccer team take home the state trophy on Saturday. “The 2021 State Team is a true reflection of what this community is all about – family,” girls cross country head coach Lauren DeAngelis said. “York High School has a rich athletic tradition and it takes support from everyone in a community to help these athletes achieve their goals.”

History in the making: Boys soccer and girls cross country take on state

For the first time in 20 years, York High School won a state championship twice on the same day. In an unprecedented feat, the boys soccer team and the girls cross country team both won state on Saturday.

“It is so awesome to see all their hard work pay off and to be the best in the state for both programs!” assistant principal for athletics Rob Wagner said. “They will remember this special moment for the rest of their lives.”

The girls won the state title earlier in the day, but it wasn’t until the boys won state, that York made history. When the boys won, the announcer on the loudspeaker triumphantly spoke, and was recounted by York parent Julie Shepherd Szczepanek.

“What an amazing day to be a Duke,” Szczepanek posted on her Facebook page. “So excited for our high school and friends. STATE CHAMPIONSHIPS for girls cross country and boys soccer. First time in IHSA history that a school won two state championships [for different sports] in one day.”

After a successful season, the girls cross country team was able to take home a state championship for the second consecutive year. Their win was even more sweet after they heard the news of the boys’ win.

“It is an amazing feeling to share in the celebration of both the York Girls Cross Country State title and York Boys Soccer State title – especially on the same day!” head coach Lauren DeAngelis said.  “York is an amazing high school that really provides its athletes with the best facilities, supports, and opportunities to ensure student-athletes can achieve their highest potential.”

As for the boys soccer team, they made history of their own. Of the boys soccer program, the team became the first ever to take home a state title; beating out Palatine 4-0 for the state trophy.

“It feels amazing to be a part of the first ever boys soccer team to win state,” head coach Jordan Stopka said. “To be honest, I still can’t believe it happened. The boys, coach Alvarez and I are on cloud nine.”

For the seniors on the soccer team, their high school season concluded in the best way possible. Their hard work, time, and dedication paid off and they were rewarded with a win that will go down in history.

“It’s a great feeling because I know in 20 years people will look down at that trophy and I hope that they’ll be inspired by it,” senior Ian Morales said.

Both teams accomplished the unthinkable by putting in the hard work and effort to produce the result they were looking for. But their belief in themselves and each other is what set them apart from other schools.

“Anytime a “first” is established, it changes the mindset of those that follow,” Stopka said.  “In the beginning the goal seems impossible, then improbable, then you get all the way to “hey maybe we can do this”. Now that it has been done I am hoping many future Dukes can see the opportunity, believe in themselves, and ask themselves the question: “Why not us?””