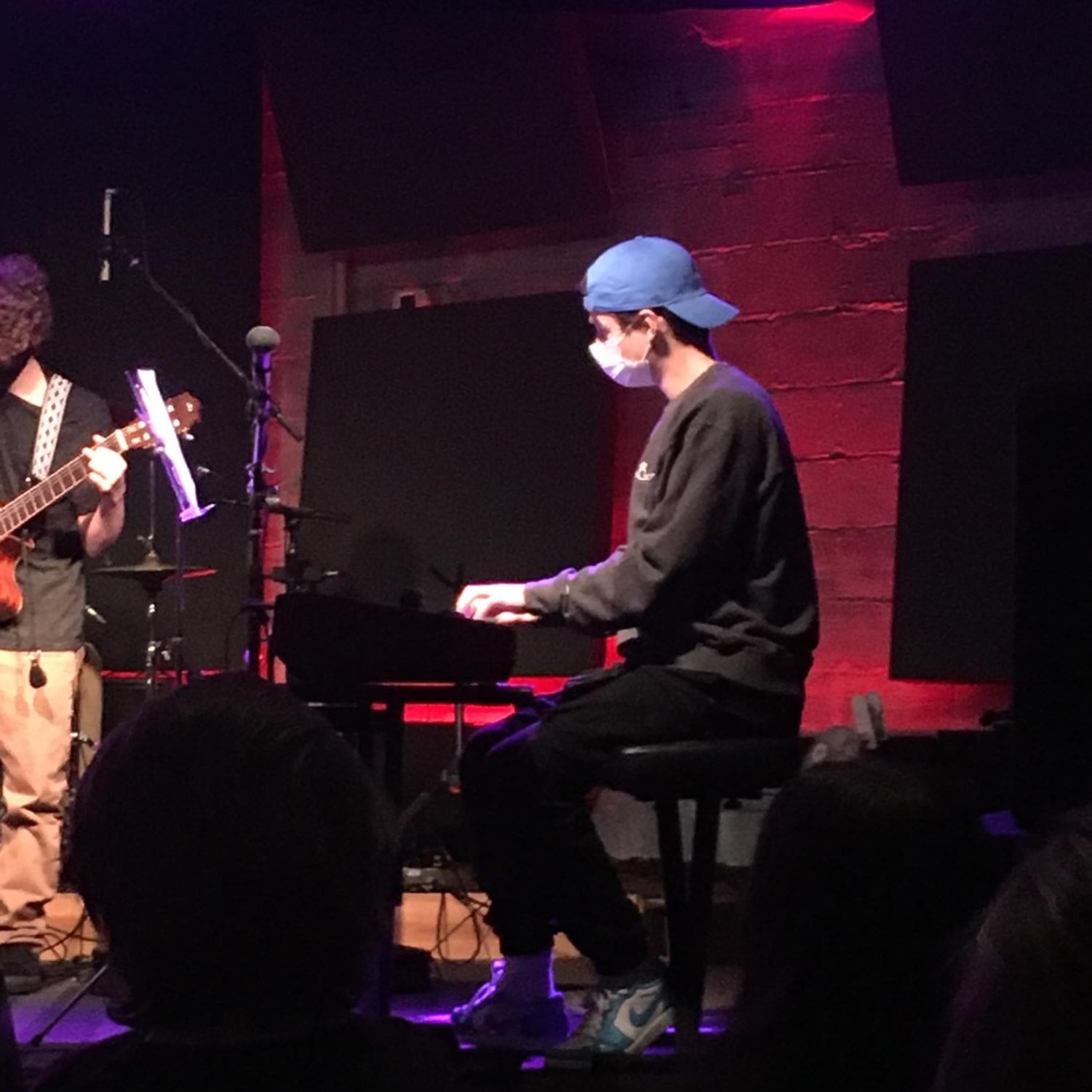 Leo Macariola playing piano alongside musical group the Kitchen at the Jam Lab performance on November 6.

Under the monocle: Leo Macariola leads a life full of music in every aspect he can

A four-year-old Leo Macariola, budding musician, plays an original composition on the piano for an audience he has in the palm of his hand. Where is the composer and performer now?

“I used to write little songs on the ukulele and I found old recordings of them,” Macariola said. “I feel like I’ve always written music. At my first piano recital I played my own song, which was two notes.”

Macariola, senior, has been involved with some sort of music since “forever” and remains a strong link to what connects almost every aspect of York music together. He is a composer, singer, guitar and piano player.

“I was in Music Together when I was a kid,” Macariola said. ”I never took it seriously until probably sophomore year of high school. I realized ‘oh this is something I actually like.’”

Macariola is in Jazz Band and Ensemble for piano, Jazz Lab for guitar, York Drama, Madrigals, Concert Choir, Music Production, AP Music Theory Club and Amateur Musicians Club. His drive to participate and excel in all things music is apparent, but from speaking to his close friends, mentors and teachers, his character is apparent as well.

“Leo is easily the single most humble person I know, despite the fact that he puts in more work than anyone else,” senior and friend Coleman Goulding said. “No matter what he is doing, whether it’s musical, academic or fitness related, he puts in an unimaginable amount of effort but never brags about his success.”

His directors and fellow musicians describe him as nothing less than “earnest”, “creative” and “enthusiastic positivity.” His creations and personality fill those around him with energy and leave them in awe of his capabilities.

“He looks like he is always ready to go do something good,” music teacher Chris Gemkow, who worked with Macariola beginning early in his high school career, said. “There’s always this anticipation in his body language that says “okay, I’m going to go do this.’”

Macariola has made his way from a two-note original composition to composing entire scores for York Drama film projects like the Laramie Project and creating string arrangements to accompany his original music in Theory of Relativity.

“The first time I heard the strings play the parts that I wrote, that was incredible,” Macariola said. “That was my greatest accomplishment by far. There’s no way that these talented people are playing what I wrote. That’s insane.”

Not only does his determination and radiating positivity make him the musician he is, his unique style of creation is an aspect of his musicality as well.

“What I found most interesting about his songwriting style was his ability to vocalize a melody with words and improvise words on the spot and the words were actually interesting,” Gemkow said. “He would just sit down, play something on the piano, have nothing yet and just start singing something with words, which is not an easy thing to do.”

As he moves on to a post-high-school career, he looks to study music production, composition or physical therapy. No matter what he plans to pursue, Macariola will continue to incorporate music into his life and he encourages others to do the same. He believes that one should never shy away from creating due to fear of failure.

“Everyone is bad at everything when they first start,” Macariola said. “Welcome being bad.”

His imprint on and words presented to those around him, musical or otherwise, is strong and long lasting.

“He is not trying to please anyone except trying to find something interesting to say,” Gemkow said.