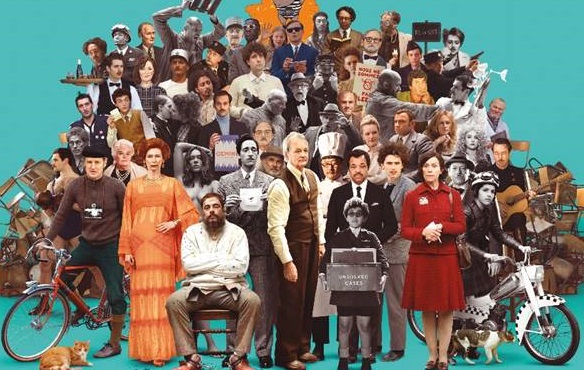 The whimsical, colorful world of “The French Dispatch”

Combined with multiple story-lines and a large number of characters, “The French Dispatch” gives audiences a look into the world of early European journalism and art. The film focuses on a collection of stories and articles published in a magazine similar to the New Yorker called “The French Dispatch of the Liberty, Kansas Evening Sun.” The stories tell tales of life, love and family through four stories, The Cycling Reporter, The Concerte Masterpiece, Revisions to a Manifesto, and The Private Dining Room of a Police Commissioner.

The crown jewel and biggest achievement of this film is its star studded cast. Having an ensemble full of A-list actors is a common trope in most of Anderson’s films. The film features Timotheé Chalamet, Tilda Swinton, Bill Murray, Frances McDormand, Bencio Del Toro and Adrian Brody. And that barely covers the amount of talent in this film. Even though many seem to look at Chalamet as the star of the film due to his growing popularity, the film is at its best when it takes advantage of the ensemble of talented actors that it has.

“The Cycling Reporter” written by the character Herbsaint Sazerac (Owen Wilson), explores the city of Ennui. While it shows off the scenery of the city through Andersons beautiful production design, the plot of the story seemed completely unnecessary. With it being the shortest story in the film it feels like it could have easily been cut and I wouldn’t have cared. However, Owen Wilson gives a charismatic and funny performance and he takes advantage of the time he is given. The character and the plot just seems out of place in this otherwise seamless film.

“The Concerte Masterpiece,” written by J.K.L. Berensen (Tilda Swinton), tells the story of an artist named Moses Rosenthaler (Benicio Del Toro) who has spent over ten years in prison for double homicide. During his sentence, Rosenthaler works on his art and creates many impressive pieces of work. His art is quickly noticed by a fellow prison inmate, art dealer Julian Cadazio (Adrian Brody). While Rosenthaler is in prison, he falls in love with his guard, Simone (Léa Seydoux). This was definitely my favorite of the stories because everyone was on their A game. Del Toro and Seydoux are giving a masterclass in subtle acting, and Adrian Brody has excellent comedic timing that ties in the charm of the entire film, into this story of romance, self discovery, and art.

“Revisions to a Manifesto” displays journalist Lucina Krementz (Frances McDormand) as she reports on the “Chessboard Revolution”. However, her neutrality as a journalist is compromised when she falls for a young protester named Zeffirelli (Timotheé Chalamet). McDormand shines as she portrays a woman who struggles with loneliness and tries to find her place as an older woman longing to find love. And, of course, Chalamet’s charm is intact throughout the entire story, creating a welcoming and friendly ambiance for the film. The connection and chemistry between the characters is so compelling that with every tear jerking moment, there’s an amusing one around the corner.

“The Private Dining Room of a Police Commissioner ” is told by Robuck Wright (Jeffery Wright) as he reminisces about his eventful evening spent with the Commissioner of the Ennui police department. Anderson portrays some of the best directing of his career in this story. He perfectly conducts an equist heist scene, switches to animation, focuses on details in the production design all while directing actors and allowing them to give their best and most interesting performances. The creativity and brilliance shine through in this story making it extremely compelling and captivating.

While the run time of the film is 108 minutes, it honestly felt longer. When I left the theater, I definitely would have guessed that the movie was around 2 hours and 30 minutes long. Many critics have claimed that “The French Dispatch” is “lesser Anderson,” meaning that they’ve seen the director do better than in this film. While I agree that this film is not on par with “peak Anderson” films like Royal Tenenbaums (2001) or Rushmore (1999), it should still be regarded as a significant achievement. It takes a great director to have the consistency of good films throughout his or her career. And in my opinion, even if it’s lesser, it’s still better than most of the films coming out today.

This love letter to journalists everywhere shows that communication and connection can even bring people with the most contrasting personalities together. I would encourage anyone to see this film, if not for pure enjoyment, at least to learn lessons about our connections through a near-perfect collage of stories.