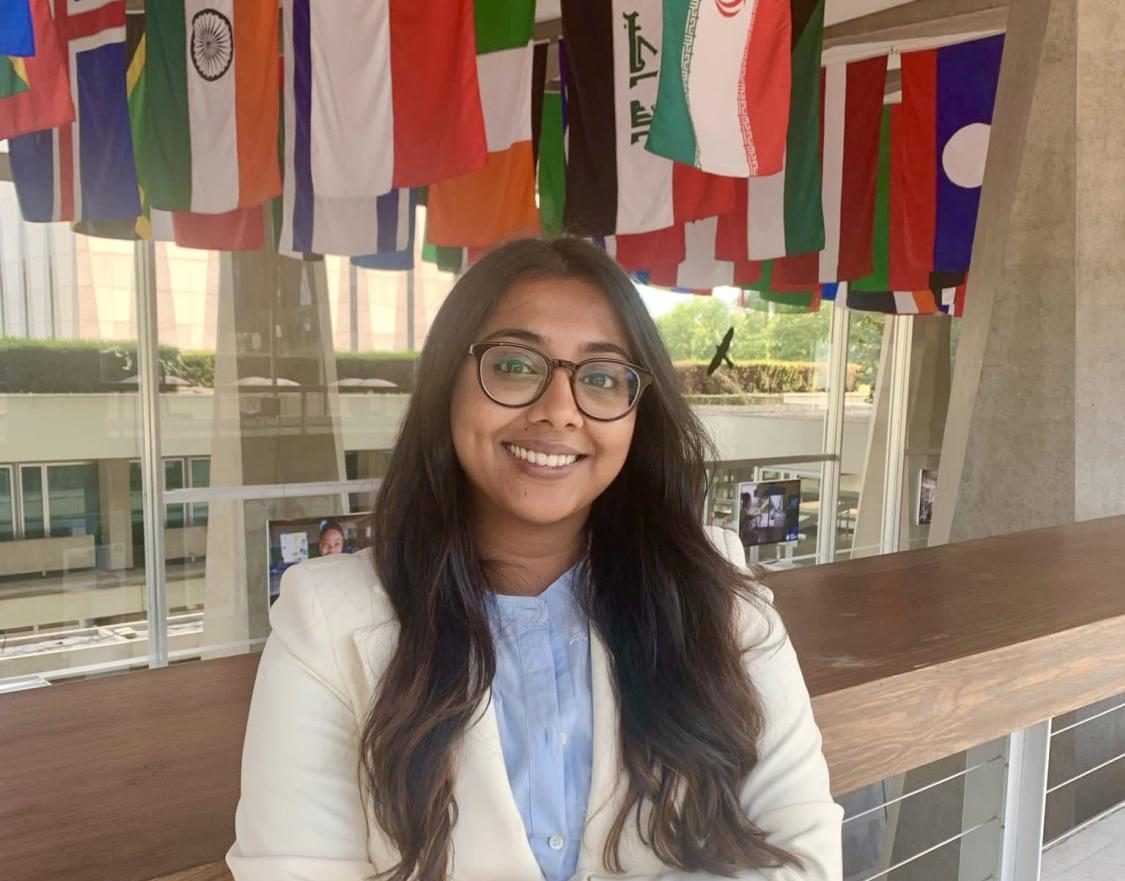 Ponnu Padiyara graduated from York Community High School a little over 10 years ago, and now, she works for the World Health Organization in Geneva, Switzerland. In the little time between her graduation and now, she was able to accomplish and experience more than she ever imagined possible.

“I thought I was going to be very very focused on medicine,” Padiyara said. “I was like- 100 percent this is going to be my goal in life. Everybody knew me as the future little wannabe doctor girl.”

From a young age, Padiyara was interested in sciences and medicine, so aspiring to be a doctor seemed to be the right fit for her at the time. But as her interests grew, her career path changed, specifically at the University of Illinois at Chicago (UIC), where she got her undergraduate degree, and at Yale University, where she received her master’s in public health.

“I had been exposed to a broad range of subjects at Yale, but especially when I went to UIC for my undergraduate, and there I got involved in a lot of political activities on campus like student body president,” she said. “I got more politically involved, so my idea and focus sort of shifted from just strictly medicine to more; how can I maybe help a bigger group of people?”

York helped me find and become more comfortable with my interests. In my first few years of high school I didn’t always get a sense of what I was truly interested in, I was just doing a lot of things because I thought it would look good for my resume. But eventually after many classes and a few different groups I got involved in, that’s when I discovered there was a niche area that I wanted to focus on.”

As her interests began to take shape, Padiyara searched for a career lane that fit into both the sciences and politics category.

“I still had an interest in health but I didn’t want to do the normal, traditional route of medicine, so I discovered this field of public health which is a blend of being able to use a lot of the science and medical knowledge but it’s working on public policies, politics, so you’re applying that knowledge to a broader range of people. It’s complex, but one silver lining is if I say epidemiologist, then people will somewhat understand what that means.”

After college, Padiyara’s career took an unexpected turn: she spent a year in Turkey working as a Fulbright Scholar english teacher and participating in community engagement projects with refugees.

“I was working with Syrian refugees that were being resettled in Turkey, and my job was basically connecting them to medical care. That really kickstarted an interest in global health for me, so then I went on to do my master’s at Yale for public health.”

From there, she did an internship with the World Health Organization (WHO), a U.N. agency that specializes in health. and has been there ever since. She worked her way up from an intern, to a consultant, and now to a respected member of the staff. Currently, she works as a technical officer for the WHO.

“Right now, I work specifically on antimicrobial resistance. There are antibiotics that we use as medicines, but a lot of the bacteria that those are designed to combat against are becoming resistant to those antibiotics. Basically the bacteria are learning to eat those antibiotics. So then you get into this situation where there is more and more resistant bacteria, but fewer and fewer drugs to treat them, so that’s an issue we call the silent pandemic.”

Last year, due to COVID-19, Padiyara’s job slightly changed when demands for support during the outbreak needed to be met.

“A lot of us got pulled into the WHO’s COVID-19 incident response team. I was working as their science writer, so I was helping develop a lot of the guidance documents that WHO releases to countries on how to manage patients and how to manage opening or closing economies. [Her job required]Going around to different people and experts, interviewing them and then putting together advice that they have.”

Today, Padiyara lives in Geneva, Switzerland, far from her home town in Illinois. The WHO is headquartered there because it is a neutral country and probably because it’s very pretty as well.

“[Switzerland] is a beautiful country. [It is] incredibly clean, incredibly gorgeous. Looking everywhere there’s lakes and mountains. Coming from Illinois where everything is flat I’m taking pictures of mountains everywhere. And all of my friends are like these are the same mountains you’ve seen for years you don’t need to keep taking pictures, but I was like- no you don’t understand we don’t have them in Illinois!”

In Switzerland, Padiyara works with people from all over the world, dealing with health issues and collaborating with others using research.

“The WHO pulls in people from all over the world. And there is a lot of representation from the United States. We also work with country governments, and a lot of times we’re working with the U.S. Department of Health or the U.S. CDC where we have partnerships and meetings.”

Looking at Padiyara’s accomplishments over the years, she reflects back on her time in high school. She explains how her education and influences helped encourage her to find the right profession.

“I was a straight up nerd and I still am. York helped me find and become more comfortable with my interests. In my first few years of high school I didn’t always get a sense of what I was truly interested in, I was just doing a lot of things because I thought it would look good for my resume. But eventually after many classes and a few different groups I got involved in, that’s when I discovered there was a niche area that I wanted to focus on.”

Out of all her memories at York, there are three classes she took that have resided with her over the years. She reflects on the lessons they taught her and her takeaways from each class.

“One is AP Statistics with Max Schoenberg, who probably doesn’t remember me, but his class was the best statistics class I’ve taken, and I’ve taken like eight of them by now. And another that affirmed my love for biology and pointed me towards my interests of biology and science was AP Biology-it wasn’t a teacher just lecturing at you-you were learning a broad range of things and able to do different experiments that put that into practice. And the last, that I didn’t even think that I would have an interest in, but turned out to be one of the best classes I took, was AP European History. It weirdly came in handy so much after I moved to Europe.”

If there’s anything Padiyara learned over the years throughout her own journey, it’s that life will take you in a number of different directions but what matters is if you’re willing to take those opportunities as they arrive and don’t let them pass you by. Clearly, that made all the difference for her career. Now, she offers advice to students in high school or beyond who may feel uncertain about their future job.

“This may not be true for everybody but it’s just what I’ve seen in myself and my friends; you may think you’re going down one path or have an end goal but there’s going to be a lot of different twists and turns along the way and at some point you’re going to have to stop fighting all of it and just go along with what’s happening. You might develop a new interest that you want to explore, or something you really wanted to get might not go your way so you have to find your option B, which might end up being a really great thing for you if you’re open to it. It’s all about being open to those new possibilities.”