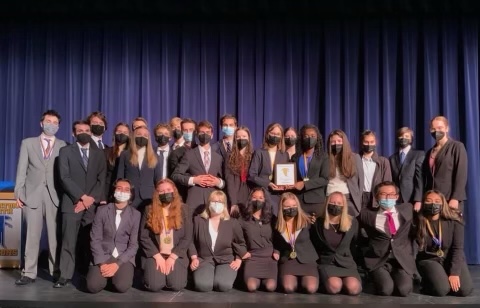 Although most sports, clubs and activities had to undergo major adaptations last year, York’s speech team may have had the biggest challenge to overcome. After a year of converting all tournaments to be on Zoom, the York speech team is glad to be back at live tournaments this fall.

“This is our first tournament [this year], and I’ve never been in an actual tournament before, but compared to spending so many hours every week to make a video [last year], this is so fun,” sophomore Delia Marianetti said. “I love getting to see everyone else’s speech as well.”

“It’s neat to see everyone else performing because last year it was only on video,” junior Dakota Thibos said. “You could just choose who you wanted to see [last year] but this year I like that you’re seeing all kinds of skill-levels.”

On top of the opportunity to observe competitors’ speeches, speech team members have the ability to form bonds with teammates by socializing in between rounds, rather than sitting at home in front of their computer.

“You get to interact with people more and meet new people, which I enjoy,”Thibos said. “As well as seeing other performers and seeing how you can improve.”

All-embracing, there are some things you cannot transform to meet difficult circumstances, for example, forming a community within a team. One of the largest aspects that COVID-19 took from students was the ability to make connections they would have otherwise made throughout the year in clubs and sports.

“Last year it was fun to have speech, but it wasn’t fun to do it virtually,” co-captain Selma Brobbey said. “I missed the atmosphere brought by in-person speech.”

Although the speech season has only just begun, the speech team is up and coming. Furthermore the participants on the team look forward to growing together.

“I feel like it’s more of a community now,” Marianetti said.