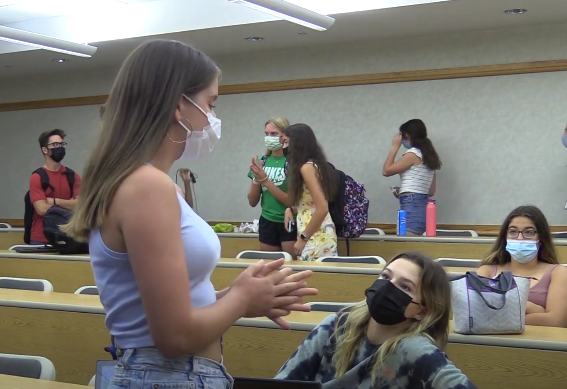 Erin Lindgren works with other Student Council members to prepare for the week of Homecoming. (Photo courtesy of YTV Productions on Youtube.)

Erin Lindgren works with other Student Council members to prepare for the week of Homecoming.

Senior Erin Lindgren’s involvement at York spans her entire high school career. From student council to clubs to sports, she kept herself busy while helping others concurrently. This became most apparent this school year when she was elected York’s student body president.

Ever since Lindgren was just in elementary school, she wanted to be a member of the student council. Presently, her younger self would be proud to see where she is now. However, the biggest benefit this leadership position offers Erin is the connections with students and teachers around the school.

“It’s a lot of fun to see different people throughout the school and to get to know people from all different clubs and activities,” Lindgren said. “The biggest thing about being the student body president is being involved.”

Having a peer who is kind and easy to work with is incredibly important in student council, and that is exactly what Lindgren is.

“Erin’s great to work with,” Vice Student Body President Maria Chornij said. “She’s always very well scheduled on what she needs to do and is always willing to help you.”

Over Lindgren’s tenure at York, she grew immensely as a Student Council leader and became a role model for many. And luckily, the Adviser of Student Council, Matt Moran, was there to witness it all. Moran worked with Lindgren in Student Council and recognized her ability to work diligently.

“Even as a freshman, Erin was an incredibly driven and dedicated member of Student Council,” Moran said. “We could tell early-on that she would be a leader in the years to come.”

On top of overseeing other clubs and activities, Lindgren must delegate Student Council meetings as they plan school events. As student body president, organizing meetings takes a considerable amount of planning and effort to maintain successful results.

“Some of my responsibilities include running the daily meetings for Student Council, forming the committees that we have for each event,” Lindgren said. “So that’s everything from Homecoming to Prom to Badmanton, all sorts of fun stuff.”

Managing the large task of being student body president is big in itself, but participating in multiple other athletics and activities takes true hard work. To cram so much into a student’s schedule requires determination and drive.

“I think time management is key because there are so many things to do, and some of them have deadlines, some of them you just have to do at some point,” Lindgren said. “So I think prioritizing and not letting things get behind you because it’s really easy when there’s so many things happening.”

Although having the leadership role of student body president may seem like a handful for most people, Lindgren manages to also participate in various activities around York.

“I am in choir, I play on the tennis team, I do pole vault and sprinting for track, and I am also involved in Best Buddies,” Lindgren said. “And Ambassadors, freshman mentoring, and a program called Amigos y Palabras.”

However, organization isn’t the only trait Lindgren uses to accomplish her goals. Persistence and will-power keep Erin on her path to success.

“Erin is so determined and hardworking,” Chornij said. “She works hard for her goals, and she always seems to reach them.”

It is needless to say that Erin is an inspiring, hardworking individual that most students at York can admire. Throughout this year of COVID-19 adaptations, Erin has worked hard to keep school spirit high, and I believe we can all be thankful for that.

“I want every student to feel that they have a community to be a valued part of, and to be as excited to be a Duke as I am,” Lindgren said.