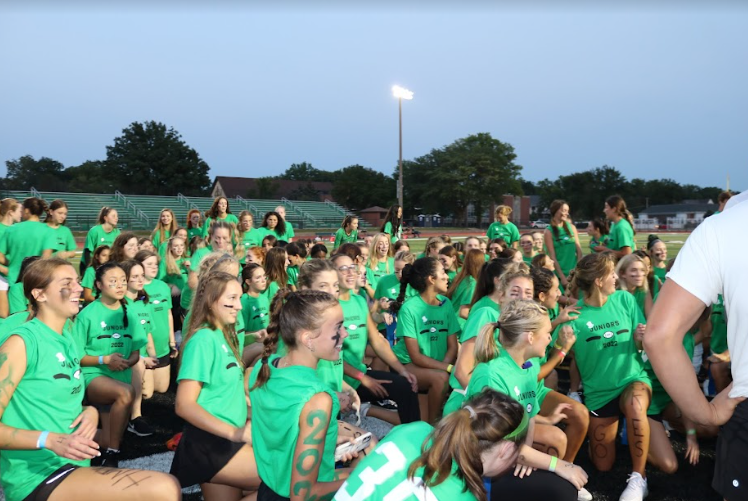 The junior team huddles up before the annual flag football game. Photo by Claire Goodman

The junior team huddles up before the annual flag football game. Photo by Claire Goodman

On Wednesday, September 14, the senior girls took the win against the junior girls in an exciting game of flag football that contributed to the many homecoming festivities. The players had an intense game, and were able to participate in the annual activity that is loved by many.

“I think it’s awesome,” junior Bri Lopez said. “It’s a great way to pump everybody up for the homecoming dance on Saturday, and it’s a good way for people in each grade to connect.”

As a tradition, some of the football players from this year’s varsity team coach the players and work with them during the game. They help by giving advice and creating excitement on the field.

Along with the excitement on the field, and from the stands, the annual game also gives the girls a chance to participate in a more aggressive game than they normally can.

“I think it’s really exciting and fun, and it’s a fun way to show that girls aren’t just there to sit on the sidelines and they can show their aggressive side, but also in a really fun way,” senior Eden George said.

The senior and junior girls are able to get involved in the fun-filled game, and create closer bonds as a grade.

“It’s super fun to try a new sport, and one that we don’t usually have the chance to get involved in, and it’s super fun to get closer with your grade and bond as a team,” senior Aleesa Shea said.

The flag-football game is a loved tradition at York, and creates a fun and competitive atmosphere for the juniors and seniors.

“I like playing football with my friends, so I thought this was a perfect game to play, and I’ve been looking forward to this for a while,” junior Hannah Myers said. “I think it’s amazing. It’s one of the best traditions for homecoming.”

Seniors ended up winning the game 19-0, holding onto their title.