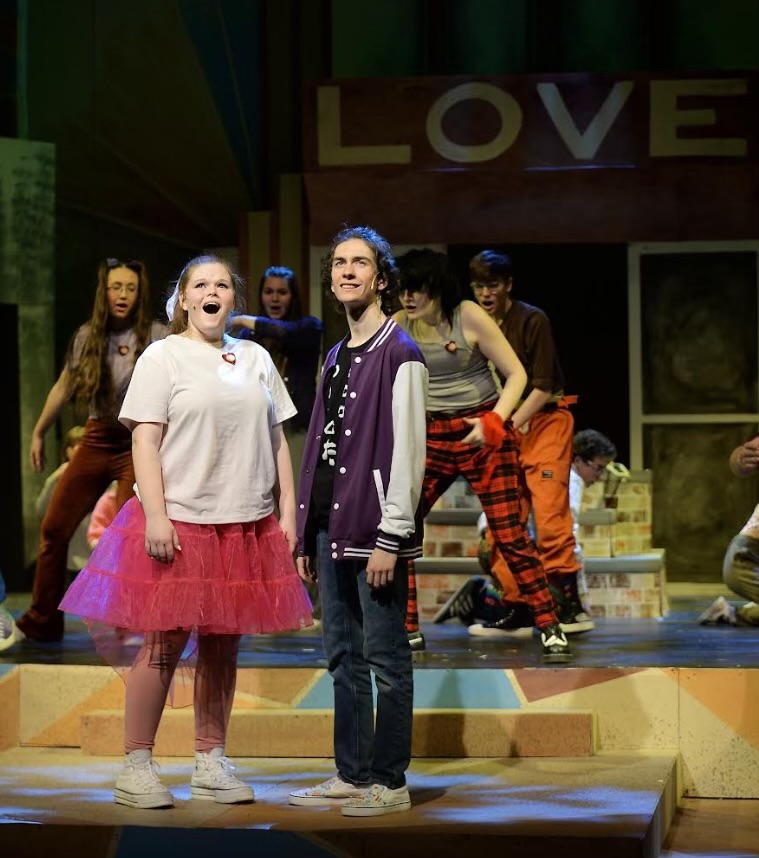 Paige Greve (left) and Owen Espinosa (right) singing “Day by Day” from York Drama’s spring production of Godspell. Espinosa is currently studying Musical Theater at Ball State University, and there is a possibility of Greve and Espinosa being reunited in college if she chooses to go there. (Photo courtesy of Stuart Rodgers Photography)

Paige Greve (left) and Owen Espinosa (right) singing “Day by Day” from York Drama’s spring production of Godspell. Espinosa is currently studying Musical Theater at Ball State University, and there is a possibility of Greve and Espinosa being reunited in college if she chooses to go there. (Photo courtesy of Stuart Rodgers Photography)

Each year, York has a consistent flow of two to five seniors choosing to major in musical theater. For seniors Paige Greve and Regan Wright, the lengthy, challenging road to college and the professional world has just begun.

The admissions process for musical theater is very different from more traditional majors. Seniors film prescreens-a video that highlights their talents in singing, acting, and dance, and allows the auditionee to introduce themselves-and they must also submit their resume. If they pass this first video round, they are invited to audition for the college in person.

“I started preparing for prescreens in May,” Wright said. “I started filming in early September…You need to find [songs and monologues] that fit you and that you can relate to.”

Prescreens are just the beginning of the long uphill battle. The competition to get into school for musical theater and be the “perfect” candidate is brutal, and people go to extreme lengths to try to get in.

“First off, there are just so many of us,” Wright said. “I’ve heard so many stories about parents being like ‘we should dye her hair blonde because they’ll like that’, and I heard this really horrible story that a parent wanted their daughter to say she was transgender so she would have a leg up. People will do anything to get into school now.”

Stories like this bring up a much larger issue: the theater industry is front facing and looks are often held to the same importance as talent. York and Ball State University graduate Tatum Langley has felt a lot of pressure to achieve the standards of the industry.

“It’s so easy to compromise your character or your values to achieve the ‘look’ because you want a job so badly, and you want to impress the casting directors, and be exactly what they’re looking for,” Langley said.

Carina Kanzler, a York and New York University alum, has experienced similar issues with the industry, and states that these standards are not only harsher for women, but that theater is an illusion of a ‘female-dominated industry’.

“Walking into a room of people waiting to audition and 75% of the room is women and 25% is men, knowing that the graduating classes of programs will be 50% men and 50% women feels so depressing,” Kanzler said. “You feel like you’re already losing.”

Kanzler’s program at NYU was an exception to the 50/50 demographic, however, she described that hers, and many other programs, did not pick shows that adequately represent the people actually in them.

The competitive nature of theater does not stop after college, yet Kanzler and Langley both continue to follow their dreams of performing. While the industry has its standards, Langley has decided to have her own standards for the industry.

“Be yourself and present how you want to, and if people want to take advantage of that, or it’s not their jam, then maybe they’re not the people you want to be working for anyway,” Langley said.

These boundaries help actors create a healthy relationship with their craft that doesn’t force them to compromise themselves.

“Performing is the best thing that has ever happened to me,” Greve said. “I can’t picture myself without it.”

At the end of the day, performing for Greve and all of these actors goes far beyond themselves, and the ability to tell a story and connect with people is what makes everything worth it.

“A woman was dancing and singing along to every song in our spring production of Godspell, and we introduced ourselves to her but she had trouble speaking back,” Greve said. “We later found out that she had Alzheimer’s and the one thing she could remember was the song I sang, ‘Day by Day’. She felt that moment with me, I remember watching that woman, singing to her, that was when I realized that theater is so powerful.”