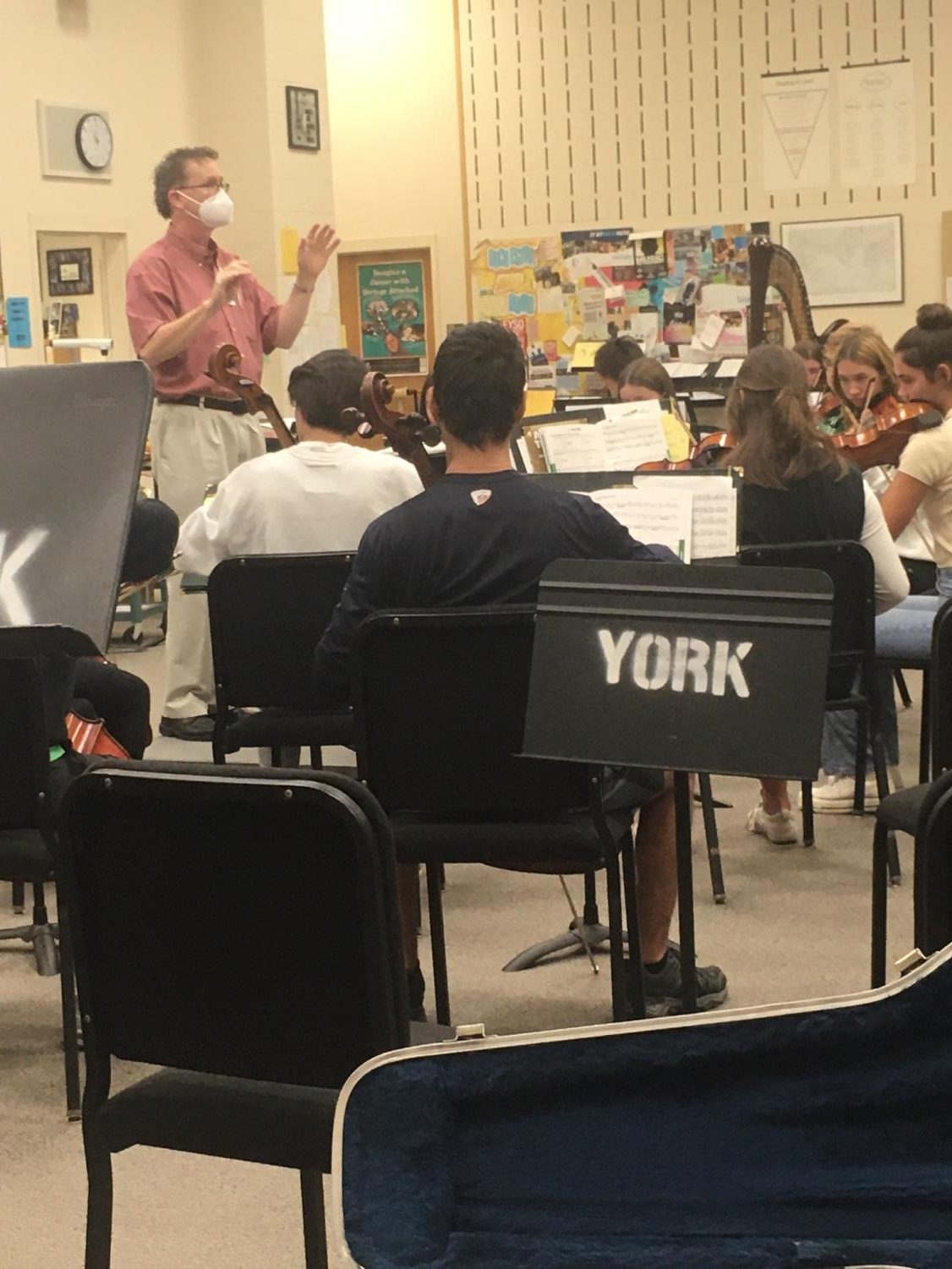 Ray Ostwald leads the Concert Orchestra through their warm up in the Orchestra Room on Oct. 5, to get themselves ready for the day’s rehearsal. (Teah Oviedo Navarro)

Ray Ostwald leads the Concert Orchestra through their warm up in the Orchestra Room on Oct. 5, to get themselves ready for the day’s rehearsal.

On September 21, the night of the first performing arts production of the year, Orchestra students  were racing around, stressing about their parts and whether they’d mess up a particularly tricky part of the piece. The nerves and adrenaline prior to the performance mixed with anticipation created a palpably high energy atmosphere.

“Everybody was really nervous but excited for the first performance of the year,” Kayla Sullivan, a member of the Concert Orchestra, said.

The event in question was the Collage Concert, the first concert of the year that includes showings from each performing arts group. It was held for the 38th time this year in the York Fieldhouse, and was considered to be extremely successful this year for Orchestra.

“It was a great night,” conductor Ray Ostwald said. “Students did very well.”

The three ensembles, going from Cadet to Concert to Symphonic Orchestra, each played a different composition, varying in difficulty. Usually, people start in Cadet Orchestra and work their way up as their skills and technique improve. However, it takes a lot of work and dedication to advance, and students spend a lot of their own time working on some of the pieces they’re assigned in order to polish their performances.

“Some of the music that we performed, students had back in May, because we knew that this was going to be at the Collage Concert,” Ostwald said.

He also added that some students practiced their pieces over the summer, because it was easier for some students to practice that way. As the first performance of the year, and one of the few that all performing arts students play in, the importance of the ensembles playing together at this performance is also stressed by Ostwald.

Since the younger students are usually in the lower levels and the older students are typically in higher levels, the more advanced students in Symphony Orchestra are able to look back at their own experiences in Cadet or Concert Orchestra and remember how they felt as freshmen. Their own transition from middle to high school can be seen in what the freshmen are going through now.

“They’re all making a lot of adjustments and they did that really well, getting used to the way we do things at York and raising their own standards of what they’re able to do,” Ostwald said.

This is especially meaningful since choosing to continue in orchestra is not an easy undertaking, especially in the higher levels. Students need to practice both in and out of school in order to better their own skills as well as how well they play together.

“At school, our main focus is balancing the different sections and working on improving our playing as a group,” Maya Ostermann, a freshman violinist, said. “At home, I try to practice everyday. I focus more on having good intonation and working on parts of the music that are more technically challenging.” Intonation is the ability to play notes in tune, and is a difficult part of playing violin.

Despite the work that goes into being in orchestra, students don’t take the class without a reason. Students have said that they genuinely enjoy orchestra, and the opportunities that it provides them with.

“It’s a major stress relief, and it opens up a world just for musicians,” Sullivan said. “It’s really nice to have to work together.

Another thing that orchestra students have said they enjoyed is the process of going from not being able to play through a piece to performing it in front of dozens of people, and the satisfaction that comes from the finishing moment.

“There’s a sort of ringing in the air, like the last notes fading,” Sullivan said. “It’s really an amazing experience, like you’ve been working hard for something for weeks, and when it ends there’s this sort of contentment.”