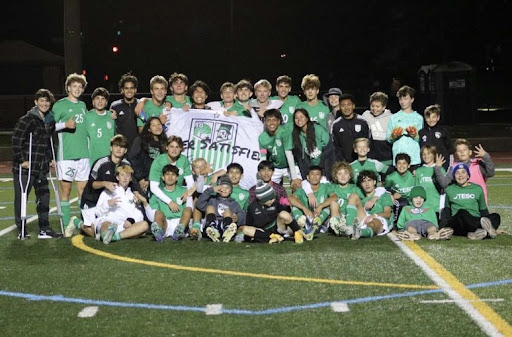 The York soccer team and managers pose in front of a banner displaying this year’s team motto, “Never Satisfied.”

After coming off of last year’s first-ever state championship win, boys soccer looks to make another deep playoff run in hopes of defending their title.

The undefeated boys look to be fierce competitors having earned the number one seed in the St. Charles East sectional. However, with over 150 teams in the playoffs this year and each and every game being win or go home, the road to another state title will be anything but easy for the Dukes.

“We’ve got a target on our back from winning the state championship, so we already know that every team is going to bring their best against us,” junior midfielder Michael Greco said.

The team has already had to compensate for the loss of key senior contributors from the previous year. Third-year Head Coach Jordan Stopka was tasked with the important assignment of creating this year’s roster with predominately new starters.

“We had two or three positions where we didn’t know who was going to fill it, so we kind of had to figure out who that player was. Now that we have our starting lineup we’re good to go,” Coach Stopka said.

One big reason why this York soccer team sticks out from the rest is their team chemistry. Just by watching them play you can tell everyone on the team has a great connection with one another, and they’re all rooting each other on.

“Everyone pushes each other to become better every single day,” Greco said. “We’ve got a really great group of guys, and I feel like we get along on the field and off the field, especially our captains, who really bring us all together.”

When asked how York students could support the team in their playoff run, Greco emphasized the importance of fans coming out to the game.

“Definitely come out to the game at Lake Park this Wednesday. When we have fans, it really brings out the best in us because you guys always do a great job motivating us,” Greco said.

Stopka echoed the impact fans and an energetic atmosphere can have on the performance of the players.

“The more people that are there, the better we do. Come out, be loud, be crazy,” Coach Stopka said.