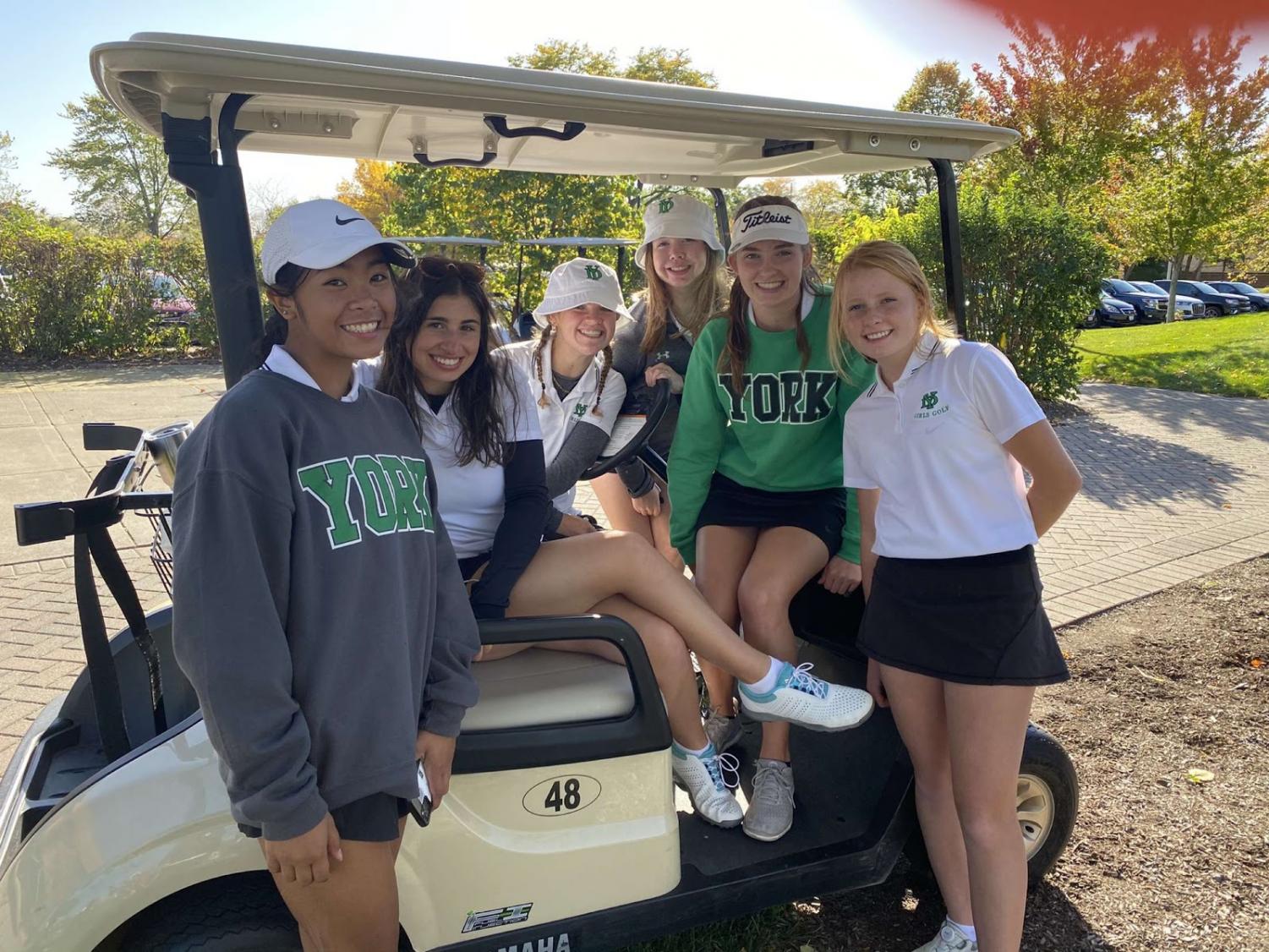 York Girls Varsity Golf finishes its season with a win

The Girls Varsity Golf Team concluded their season last Tuesday at Arlington Lakes Golf Club. The team returned from sectionals having placed first in the tournament. The team’s season was cut short this year due to COVID-19, but the coaches and players didn’t let the restrictions disrupt their season. The team placed fifth in regionals this year, closing out their year at sectionals.

“We advanced as a team to regionals, considering only three teams advanced and this year only two teams could advance,” varsity coach Barb Tilden said. “This season had a lot of changes as we went through it but we were all so glad we even had a season with everything else going on.”

Many fall sports were not as lucky when it comes to getting a season, but the girls took what they could and played their hardest. Throughout the season, the players had an outlook similar to that of their coaches.

“We were lucky to have a regional and sectional tournament this year,” senior Elle Borchardt said. “I’m happy we got to experience them both even though there is no state tournament.”

Despite the quick end to the season for the team, the girls continued to have meets normally, and the rules of the game remained the same, but there were a few changes. This year, spectators were not allowed until sectionals, players were told to social distance throughout the match, players could not shake hands at the end of the match, and a new IHSA golf app was introduced in the tournaments.

“The app had live scoring so we were able to see how our opponents were doing throughout the round,” Borchardt said. “That definitely added some nerves, but we just kept calm and played our game.”

The game of golf is all about a player’s mental game, but that can be challenging when the girl’s face their own nerves. The players competed against eight other teams for the champions title. Throughout the meet, the girls found ways to keep their minds off nerves.

“Matches can be stressful sometimes, especially big meets,” senior Julia Filosa said. “But being with the team, and talking with players on the opposing team is always calming.”

The girls constantly reminded themselves to stay positive. Though they all seem to have their own way of calming their nerves, there seems to be one thing they have in common:  communication.

“I like to talk while I’m playing,” senior Jenna Hughes said. “I try to get to know the girls from the other schools I’m playing with.”

At this year’s sectionals, the golfers faced weather conditions that were less than ideal. The wind, which is never a golfer’s friend, picked up throughout the rounds, but they managed to find a way to play through it. Not only did it create more nerves for the girls, but it made the competition that much harder.

“It was super windy and hard to predict the direction the ball would go,” senior Nora Foley said. “To help with this I would pick some grass and see what direction it would fly in.”

Though matches could be stressful, the girls found time to get to know each other better. Even with social distancing guidelines, the team still enjoyed themselves with their teammates. They created a bond by playing some pranks on the new members of the varsity team.

“My favorite part of the season was getting to have fun with the team. In the beginning of the season the seniors TP the new players’ houses, so it was a fun night to go and do that,” Hughes said.

The girls found a bond this season that allowed them to become close as a team. The players worked together and enjoyed the season, resulting in a sectional victory. While the seniors must leave, the juniors will stay to carry on the team for the 2021 season. Looking forward to more golf, the girls try to find the positive in the seasons to come.

“Next year I’m excited to play teams outside of our conference because we were limited to only playing a few teams this year which meant less matches,” junior Ellie Wiygul said. “I’m also excited to be able to take the bus and hangout before and after meets cause this year was a lot more focused on playing, rather than making friends and having fun. I think it built up more pressure on the players for next year and it will also hype us up to play better”.

Although seniors have completed their last season as a member of the golf program, they will always be thankful for this season and remember the experience and their favorite memories.

“I would say the best part of the season would definitely be the team”, Filosa said.  “We are all really good friends, and love golfing with each other. Golf is always my favorite time of the school year and I am going to miss it next year.”