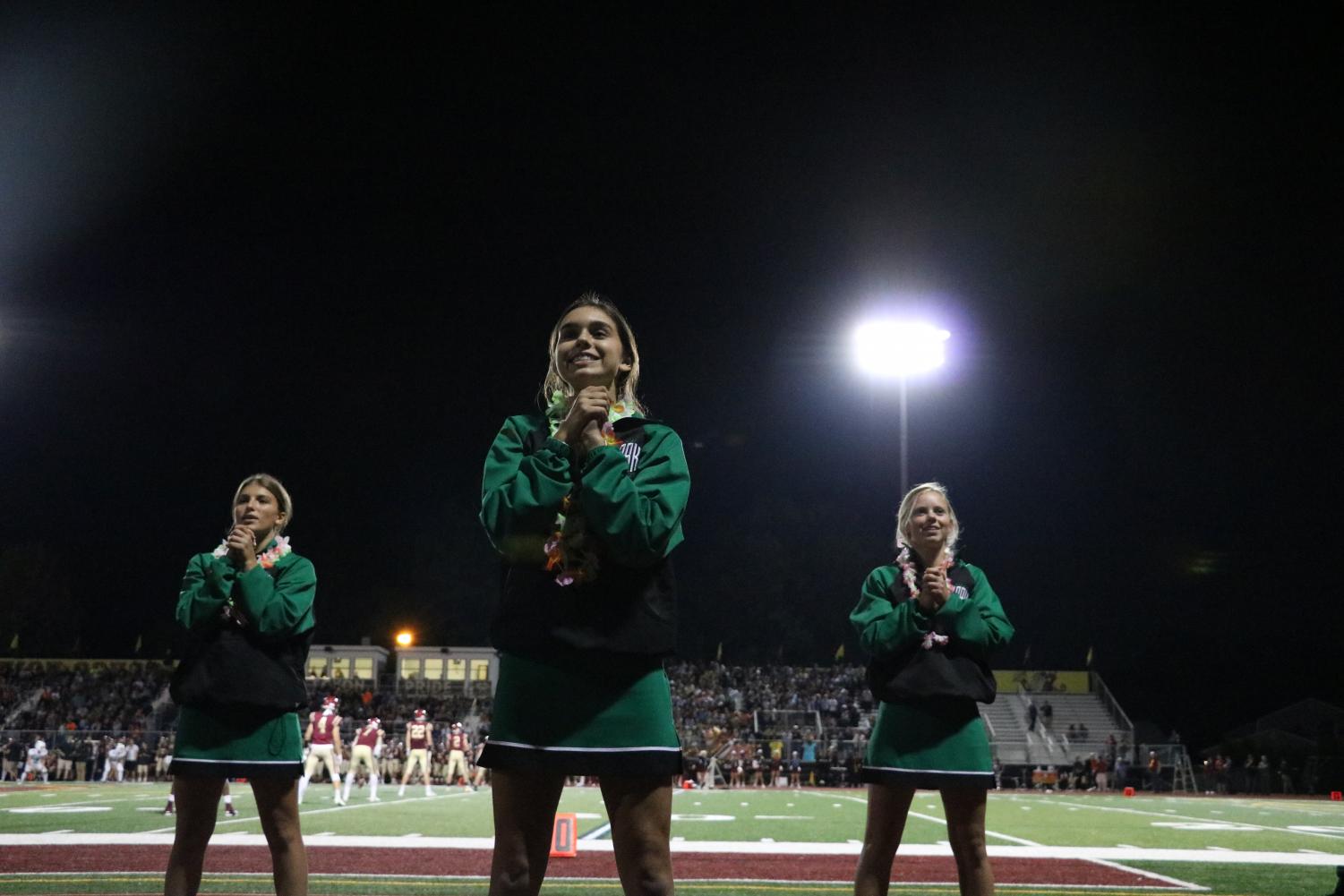 Haley Brown smiled on the sidelines of the first football game against Schaumburg during the 2019-2020 season on August 30, 2019. Now, as a senior varsity cheerleader, Brown reflected on her time as a member of the cheer program as her season remains suspended. “I found some of my closest friends through York cheer,” Brown said. “I’ll always cherish all of the memories we have together.” (Photo by Hannah Brody)

Haley Brown smiled on the sidelines of the first football game against Schaumburg during the 2019-2020 season on August 30, 2019. Now, as a senior varsity cheerleader, Brown reflected on her time as a member of the cheer program as her season remains suspended. “I found some of my closest friends through York cheer,” Brown said. “I’ll always cherish all of the memories we have together.”

Cheers to school spirit during a pandemic: Haley Brown reflects on her time as a York cheerleader as her final season is suspended

Haley Brown is a name most students know. Her smiling face is one that is recognizable from all the Friday night football games. Her name is one you might hear on announcements about Student Council as the student body president. No matter how she is known, in 2017, she walked into York as a freshman and now, in 2020, sits with college applications to fill out during a school year no one expected.

In 2017, Brown took her place on the sidelines as a junior Varsity cheerleader, after abandoning her leotard she wore for so many years and, instead, picking up a pair of pom-poms. Now, as a senior, the day she can pick those pom-poms up for one last season is unknown. Like most athletes, cheer was more than the uniform and the accessories to Brown; it was a group she could depend on to teach her lessons for the future with or without a season.

“I loved that cheer was a team-based sport, while gymnastics was more individual so I was excited to start a new chapter,” Brown said. “Cheer is unique because we physically lift each other up and every part of a routine requires communication. In my daily life, I have grown as a leader and a collaborator which will aid in college and beyond.”

As a sport that requires a lot of physical strength along with mental toughness, Brown was met with challenges in the beginning that not only improved her skills but also her relationships with her teammates. As a flyer, Brown was thrown in the air and had to trust that her teammates would not only catch her, but, in some cases, they would have to hold her up.

“While I was skeptical of my teammates basing me at first, I learned to trust them and our stunting soon grew stronger,” Brown said. “Our close-knit team is so supportive, and I know I can always depend on my teammates even down the road.”

A stunt group is one of the tightest bonds between teammates for cheerleaders. Angelina Ferriola, one of the bases for Brown, was one of the teammates Brown entrusted to hold her up and catch her in mid-air.

“The bond that we have is something special,” Ferriola said. “You all really need to trust each other and help give advice so the stunt can work.”

“My teammates taught me the importance of community. I never had a close team to open up to before,” Brown said.

As Brown’s chapter comes to an end under unfortunate circumstances, she was more than just a cheerleader on the field. By becoming the student body president her senior year, Brown ensured there was no shortage of school spirit in her life even if her season was suspended.

“I have always been passionate about school spirit and wanted to represent York on and off the field,” Brown said.

Brown has made a lasting impression on her entire team and it is made clear by her motivated and passionate mindset that allows her to pursue all her goals.

“[Haley] takes a lot of initiative and has the potential to do great in anything she puts her mind to,” varsity coach Emily Bowman said. “She is an excellent student-athlete and her ability to excel in both sets her up to handle any future challenges she might face to reach her goals.”

Brown, like most people, is uncertain of what the future holds as a student and as a person; however, she partially credits the person she became throughout high school to the team that boosted her up physically and mentally.

“Cheer has truly shaped me into the person I am today and I couldn’t be more thankful for the York Cheer program, my teammates, and my coaches for the experiences and memories,” Brown said.