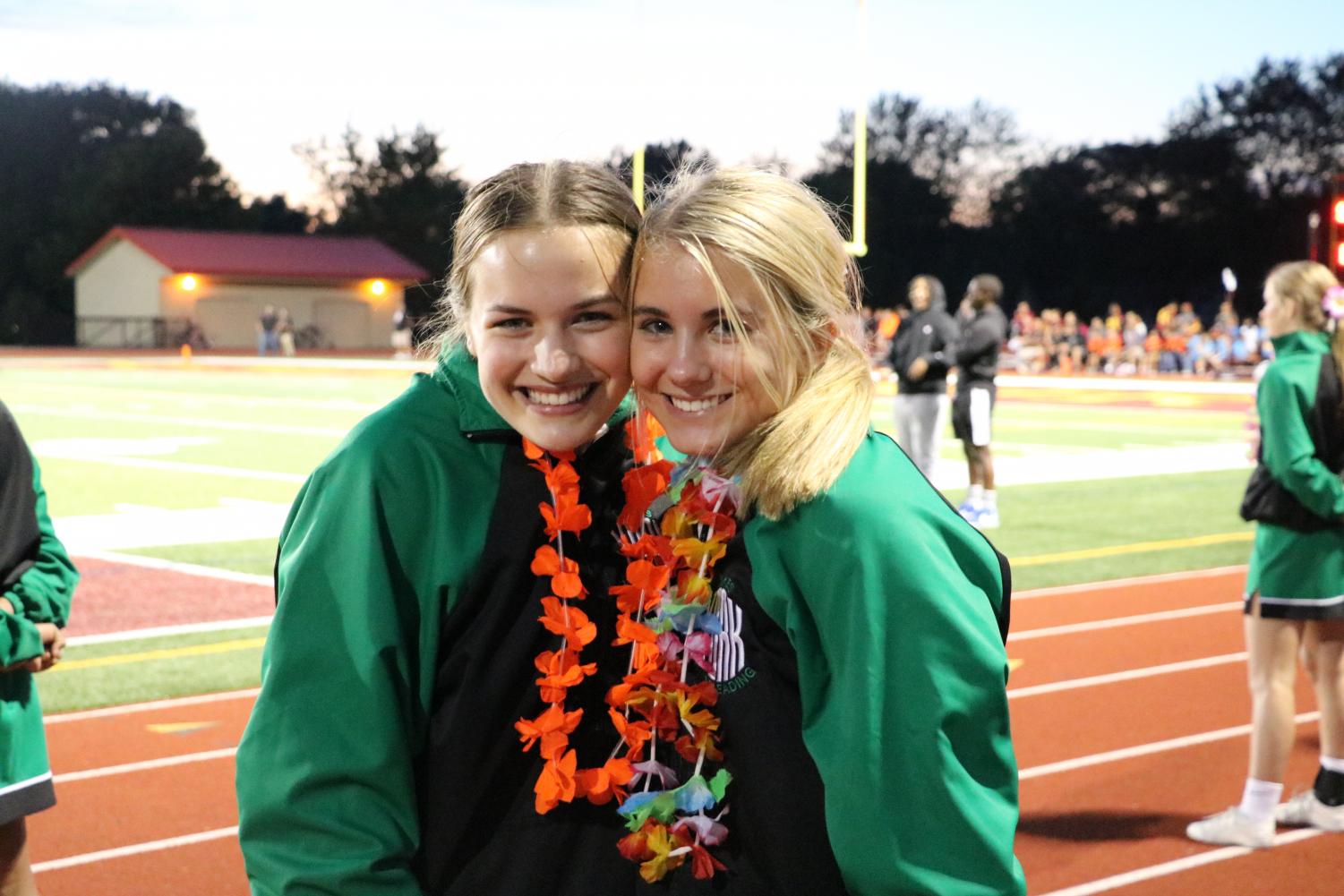 As a junior, Grace Maniola took the role of a captain alongside graduate Emilie Sadowicz. The two cheered at the first game of the 2019-2020 season at Schaumburg in their leis for the Hawaiian themed football game. “Even when Grace wasn’t captain, she still found ways to show leadership in practice and competitions,” junior Bree Spallone said. (Photo by Hannah Brody)

As a junior, Grace Maniola took the role of a captain alongside graduate Emilie Sadowicz. The two cheered at the first game of the 2019-2020 season at Schaumburg in their leis for the Hawaiian themed football game. “Even when Grace wasn’t captain, she still found ways to show leadership in practice and competitions,” junior Bree Spallone said.

The Meaning of Cheer: Grace Maniola reflects on her time as a cheerleader as she loses her final season

As the junior captain for York Varsity Cheer, Grace Maniola ranked very high in being one of the most upset teammates about not making it to state for the 2019-2020 season. Now, the current senior sits at home going from Zoom call to Zoom call, wondering what will even happen with her senior season.

“My junior year, our team was the best we’d ever been. We were in a new sectional though, and we didn’t make it to state for the first time in a few years,” Maniola said. “We were all heartbroken and thought all the time the work we put in wasn’t worth it.”

At the time, Maniola saw this as an experience she would learn and grow from; however, her intent of improving for the next season couldn’t have come to a greater halt when COVID-19 caused IHSA to suspend the season for winter sports.

“My biggest learning experience is actually happening right now,” Maniola said.  “I focused too much on the fact that we didn’t have a good chance at state, which was only one tiny part of a really fun year. Having the whole season taken away made me realize there were so many other rewarding parts that I wish I enjoyed more instead of only ever thinking about how it would end.”

All teams have a specific thing they focus on in order to set them apart from other teams. For some athletes, those strategies can only be applied to their sport; however, more often than not, they take those lessons learned and continue to use them in life after they’ve retired their uniform.

“Aside from some of my best friends, I am going to take with me [the] attention to detail,” Maniola said.

Maniola described attention to detail in cheer as the most precise movements such as the foot you step with first or the way you clap your hands as a team movement.

“Our coaches took pride in helping us win against teams with the same, or sometimes harder, skills by focusing on cleaning up every detail,” Maniola said. “I think a lot of us doubted our coaches when we would spend time on this instead of trying to add harder skills, but it always paid off in the end.”

Most team sports depend on each player showing up for various reasons. The team could be learning a new play or skill. For cheerleaders, they depend on their teammates to hold up their team members and perform individual parts of a routine. The same goes for effort, as a team that has the goal of unison in some parts, team members have to be equally motivated to put in the effort required to be on the same page.

“I have learned accountability from my teammates. If one person isn’t at practice, then there are entire parts of the routine we can’t practice,” Maniola said. “Even when we have everyone there if one person isn’t putting in the same effort as everyone else then it’s not going to work.”

Maniola’s efforts and dedication for her team have not gone unnoticed by her teammates. Her accountability for herself rubbed off on her teammates to ensure they had the same motivation. As the captain, Maniola had to come up with ways to engage her teammates through rigorous practices and late nights.

“[Grace] finds plenty of effective ways to keep us all motivated,” junior teammate Bree Spallone said. “Even when Grace wasn’t captain, she still found ways to show leadership in practice and competitions.”

As a gymnast growing up, Maniola was used to keeping to herself at competitions and the word teamwork not being a huge part of her athletic vocabulary. As she evolved more as a cheerleader, her perception of being part of a team and the environment of competitions changed as well.

“The coolest thing to me about cheer my freshman year was sportsmanship,” Maniola said. “My favorite part is when you pass a team or even just one other girl, everyone says good luck or good job to each other.”

As the varsity coach, Emily Bowman hoped to instill this sense of sportsmanship and teamwork in the cheerleaders through their time at York.

“Cheer teaches the athletes many things,” Bowman said. “I hope they learn all of these things, but I also always hope for the athletes to build long-lasting relationships that can go beyond high school.”

Bowman was successful in her efforts to create a team with a strong bond. As Maniola leaves high school, she will reflect on her memories, many of which relate to the nine month long cheer season she shared with her best friends.

“My teammates are my best friends and they’re all like sisters to me,” Maniola said. “The bond we have is really cool to me because I’ve always felt close to everyone in every grade on the team, even if we are four years apart.”