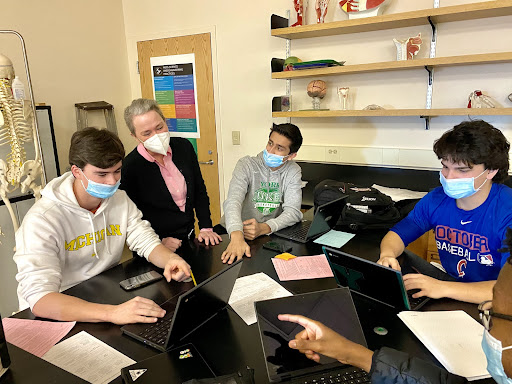 New year, new resolutions! Students and staff members reflected on their past years resolutions as they formed new goals for 2022. Many factors such as personal motives, pandemic and school are common themes in most resolutions. People of York’s community shared some of these resolutions.

“My new year’s resolution is to get better at cooking,” Colin York said. “Being in LaBrigade and having a cooking Instagram have influenced me.”

Since the 19th century, people made New Year’s resolutions in order to better themselves and create small goals that can be achieved throughout the year. Since the dawn of this new year, teachers and students buzz with excitement about these resolutions and the fresh start that follows. Stella Kohl, sophomore, gave an insight to what her New Year’s resolution looks like.

“My New Year’s resolution is to take better care of my body,” Kohl said. “This doesn’t only consist of eating better, but stretching and doing strengthening exercises daily so I can slowly get stronger and less injury prone. What really influenced me to make this resolution was fracturing my back last year which led to having a really restricted few months as far as what movements and activities I could do.”

With schools shutting down last year due to the pandemic, many students lost motivation to work hard and force themselves to learn and grow, this has forced many students including York to focus more about their grades and studies this year.

“My resolution last year was to get better grades,” York said. “I was able to achieve that by working hard and meeting with my teachers.”

As the new year brings new beginnings, it also contains the end of some chapters. Bob Blaus teaches at York as a science teacher and will be retiring at the end of this school year. Blaus shared his resolutions for his final year and his plans for moving to Wisconsin.

“I’m going to retire this year, I want to end the year awesome,” Blaus said.  “I want to try to have the best year that I can, and spend time with my students. And then at the end of the year, I will start the second chapter of my life. 2022 is a big year.”

For many people, forming resolutions were impacted by COVID-19 and the circumstances entailed. Nancy Wolaski, science teacher, shared her resolution and how the pandemic encouraged her new found mentality.

“[My resolution is] to be in the present,” Wolaski said. “I think that a lot of times we’re worried about what’s coming up and what’s next. At this point, 18 months or two years into the pandemic, I don’t want to think about what’s going to happen with omicron or what it’s going to change into. So instead, I’ve shifted to more to who’s in front of me right now and just connecting as humans.”